Theater of The Absurd - Starring: Obama, Bibi and Abbas 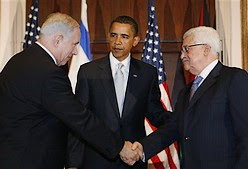 Poor stage direction this time. No smiles. Nobody seems pleased. And that's the best thing I can find in Obama's little show. Obama bit off more than he can chew. He thinks he can push around two men a generation older and with lots more experience.

"The pivot toward tackling issues that include the status of Jerusalem, the fate of Palestinian refugees and the borders of a future Palestinian state greatly increases the stakes for an administration that has found even small advances to be beyond reach. It also risks making Mr. Obama appear ineffective in having not gained a tangible early goal of his Middle East policy."

This performance is proving more farce than drama or romance.  Israel's Prime minister Binyamin Netanyahu's report is the opposite of Pseudistinian Abbas's.


"While Prime Minister Binyamin Netanyahu emerged from his meeting with US President Barack Obama and Palestinian Authority President Mahmoud Abbas Tuesday saying that the Palestinians had dropped their preconditions for negotiations, and that the discussion now centered on the framework of the talks, Abbas himself announced that nothing less than an Israeli withdraw to the 1967 borders would enable resuming peace talks."


Who was supplying the translators?


Who has been advising Obama?  His words and behavior were rude, immature and uncalled for.

Obama scolded Netanyahu and Abbas. "We've had enough talks," Obama said. "We need to end this conflict. There is a window of opportunity but it might shut."

Obama made it clear during the meeting that he was interested in resuming the negotiations between the sides "about all outstanding issues" based on the talks and signed agreements since the beginning of the Oslo process 16 years ago.

"There's an historical record of the entire past negotiations and there are principles," he said.

"We won't start the negotiations from scratch, we will not take the historical record and toss it aside. Nor will we wait for the perfect formula."

He also said: "It's difficult to disentangle ourselves from history but we must do so. The only reason to hold public office is to get things done. We all must take risks for peace."

"We cannot continue the same pattern of taking tentative steps forward and then stepping back," Obama told reporters as he sat down for the meeting.

"Success depends on all sides acting with a sense of urgency."

The U.S. president said both sides must get formal peace negotiations back on track. "Simply put, it is past time to talk about starting negotiations," Obama said. "It is time to move forward... Permanent status negotiations must begin and begin soon."


Simply put, Obama hasn't a clue as to what this "conflict" is all about. He's dictating to foreign powers.  He decided what the end product should be and he want it now, like some bratty kid.


For the zillionth time, peace between us and the Arabs isn't something that can be simply negotiated, nor railroaded, like Obama is trying to do.  He's acting haughty and imperialist. You can use the word "chutzpadik," too.

The time has come, OK rather overdue but better late than never, for Israel to refuse to attend any more of these events.

We are an independent country, made of an ancient people which has returned to its homeland.  Only we, Jews, have a history of independent nationhood in this part of the world.  We don't owe anything to any foreign leader.  Here we are smack dab in the middle between Rosh Hashannah and Yom Kippur.  Our prayers repeat that G-d is Our King.  We beseech G -d to forgive us for all our sins, including the sins to our Land and Peoplehood.
Posted by Batya at September 23, 2009

Well, now that the claims of the Falacstinians in Gaza, Yesha and Jerusalem are being called "legitimate" by Little Lord Fraudleroy,

it's time for Am Yisrael to stand up, and refuse to shut up, until the Knesset stands in firm resistance, or the government is brought down in favor of one that serves Hashem, Eretz and Am Yisrael.

We need a year of massive Tshuvah.

only *after* we retreat to the 67 borders will abbas be willing to negotiate?!? at that point what is there to negotiate? what else would he want? would he still be fighting for right of return? and if there is no ror, then its back to terrorism?!? i really dont get how everybody doesnt see what is going on here.

there is really very little new here. just more talk about how we need more talk. i tend to agree that obama is out of his depth here.

Imperialist is how you spell it.
Other than that, Obama is definitely a jerk. If you are interested, go to the National Review Online and see what Victor Davis Hanson has to say. He compares BHO's behavior to that of a college president toward unruly students. He has had no experience in dealing with the real world. He apporints czars, makes bombastic statements and wastes money besides lacking a certain vital part of the male equipment.

Shtuey, a and goyish, good points. Can't they all see that the emperor's in his altogether?

goyish, my spelling's going down, and I lost my spellcheck.

The latest from the Hussein. "End the Occupation". He hammered Israel at the UN today.

This is from John Bolton "Bolton: Israel on the Chopping Block
Former United States ambassador to the UN John Bolton said the president's message had strong significance, particularly given the venue. Obama has put Israel “on the chopping block,” Bolton warned."

Getting a little interesting now I would say.

Anon,
don't you get it already? The conflict is not about Judea and Samaria, but rather all of Israel. They could not care less about the mountains, they want to go back to their land in Gush Dan and other areas. So the ethnic cleansing of Jews from the 'West Bank' is just the starting point.

and what does this Obama saying mean
There is a window of opportunity but it might shut."

What might be shut, what needs to be solved now, that can't wait another ten years?

Bibi has shown he is "the lesser of two evils." I shudder to think of what dangerous mischief Livni would get into at our expense had she been elected.

Bibi's rhetoric at the U.N. was faultless, but then oratory was always his forte.

Talk is cheap and he must now decide whether to remain an American lackey, or start acting in the best interests of Am Yisrael in Eretz Yisrael!

I'm sick of Obama meddling in affairs that aren't his business. My last check of the globe Israel was in the middle east, not America. It's none of Obama's business. He needs to butt out.

And all of his condescending scolding, blunt admonitions and teachable moments are enough.

Who made him president of the universe?

Israel needs to convey that to Obama, too. Just refuse to meet with him. Period. End of story. It's obvious Obama is biased. Further meetings will only wear Bibi down and Obama will get what he wants, which is also what Abbas wants.

I read something about domestic violence that could apply here--say you have an abusive spouse. You break up and leave. He keeps leaving messages. Instead of deleting all the message you get fed up and call him after the 68th message.

Lesson learned? He knows that after 68 messages he'll get what he wants.

Netivotgirl, Bibi would be so much more nationalist in the opposition. He's strong on knowledge and weak on spirit, Jewish soul.

We must do what we can and pray that the "total" of the People of Israel is enough for G-d.

Keli, is that really the feeling in the states?

Alot of people feel this way. Check out my blog post on Poll-Most New Yorkers Want Obama To Butt Out.

Or do a search about public response to Obama meddling in the NYS governor elections.

With Obama interrupting prime time TV for what amounts to campaign style speeches, his intrusion into the school classroom to indoctrinate little kids, and his repeated meddling in affairs that don't involve him yes.

People are sick of Obama. The over saturation could be his downfall in the next election.


Read about the polls showing people in all political parties being disgusted with Obama trying to tell governor Paterson to step down.

Paterson has very low approval ratings but they still don't want Obama chiming in with his two cents about just about everything.


He's preaching to virtually everyone around the globe--Israel, Palestinians, Iranians, Muslims in Africa, the cop Sgt. Crowley that arrested Obama's friend.

Then at the UN address he started harping on melting polar ice caps. He has an opinion on everything and knowledge about very few things.

Interesting
It's still early in his reign. Too many people worship him and refuse to think of voting for anyone else, as if there seems to be a strong opposition in the wings. but... who knows...