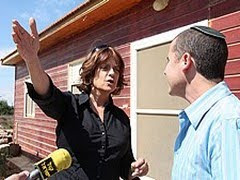 Unfortunately, too many Jewish Israelis have a rating system for the Land of Israel and our rights to live live in it.  They've divided up our Land into, what's ours, really ours, we can live in, not live in ad nauseum.

Unfortunately, this dangerous philosophy can even be heard in parts of Judea and Samaria.  Gush Etzion has been one of the strongholds of this "cult."  The general feeling projected is that, as long as they're "included in the consensus," they feel safe and satisfied.  Of course there are exceptions, opponents, most notably two women, Nadia Matar (Women in Green) and Sharon Katz (Voices Magazine.)  They are today's Ruth and Chana, struggling to change the world.

Our enemies, internal and external, don't accept the distinction.  For former Minister of Education MK Yuli Tamir, a small Jewish community in Gush Etzion is just as dispicable, unacceptable as one overlooking Shechem.

"Anarchists like you" are a problem for law enforcement and the peace process, MK Yuli Tamir (Labor) reprimanded settler Udi Ragones as she stood Wednesday in the doorway of his small one-story home in the Nativ Ha'avot outpost in Gush Etzion.

I'm not surprised that she said that. As obnoxious and inaccurate as her statement/insult was, it was totally consistent with her ideology.  Periodically, when the world and many in Israel think that towns like my Shiloh are about to be destroyed, the target moves to the Golan Heights.  In the forefront of the struggle to stop the pressure are many of the same Land-loyal Jews who support Jewish Life in Judea and Samaria.  And then we hear from the Golan:


In a smaller scale, this is no different than Prime Minister Binyamin Netanyahu's mistaken policies. By trying to diplomatically compromise, our projected legitimacy is weakened. You can't shouldn't make a deal with the devil.  Those deals backfire.


We're all One People in One Land, and we must work together.

Batya, although you may be to the right of me, I'm with you on this one: I had the experience talking with close friends at a Shabbat dinner in Efrat once, saying,"you're distinctions are meaningless to those who oppose you." You'd have thought by their expressions and tut-tutting, that I'd offered to serve shrimp cocktails as "forshpeice"...

Agreed! We are One People in One Land. And we have One G-d, and we should pray together as well.

Dave, if you read my stuff, you'll see that inconsitencies bother me. I can't abide hypocrasy. I don't think of it as "right wing," just common sense.
I'm glad you agree on this!

then you would say we have as much right to tel aviv, jlem, etc. as amman?!

the way i see it, the way things are now, it is questionable to push a new-settlement agenda in areas heavily populated by arabs, etc. largely pointless, and probably negative.

the gush etzion position you mention is indeed noxious. it lacks empathy for others who, but for the grace of god, are in their position. they should have more of a klal yisrael view, methinks.

yuli tamir is an arrogant human being, and we would be better off without her in a position of power. in a big way.
i mean, here she goes to someones house, and insults him! where are her manners? this is the most basic of etiquette. she can question him and his ideals, but this is said so rudely, aggressively. please. [i remember around 18 years ago chaim ramon visited an aguda mk, and asked him plainly but respectfully about his positions. that, at least, was acting like a mentch. what happened since then...]

im all for compromise, but i dont think arabs really understand the word the way the west does.

a, starting from the end. You can't compromise with people who are incapable of doing so. That's the key. The Arabs see all this as weakness and will just keep pounding away with one aim in mind, our destruction.
We have to accept this as the truth and make our policy suit reality. That's why I'm the pragmatist and you're the dreamer. Get real.

i think i said the same thing you did: arabs dont understand compromise, so you cant compromise with them.
hate to say it, but we agree on this point :)