The True Lesson From The Holocaust

Arlene Kushner has an excellent article on YNET explaining what has been missing in Israel's hasbara, information campaign.

This is a very long-running problem. Nothing is new at all.

Today, being Holocaust Remembrance Day, it fits for me to criticize Israeli and Jewish leaders' reliance on a false premise that many in the non-Jewish world support us because we lost so much in the Holocaust. The world didn't care when Jews were being systematically and legally discriminated against when the Nazis first took over Germany, by democratic means, and they didn't do anything at all to stop the legally sanctioned murder of Jews.

We have no cushion of support and sympathy. It's a myth.

How many world leaders have clearly apologized for what was done to European Jewry?

The legitimacy of the State of Israel isn't derived from the ashes of dead Jews murdered by the Nazis during the Holocaust. Yes, murdered; they didn't perish!

I guess I'm in a very tiny minority of Jews, because I consider the Holocaust misused. I don't want anyone's sympathy. I don't want their money as "reparations." By emphasizing the money, the financial losses, there has been a de-emphasis of the moral aspect, the moral responsibility of Germany, Europe, the United States and the rest of the world.

By demanding money and not demanding that the world admit its guilt, World Jewry has failed. And that is the foundation of the constant condemnation we suffer from the United Nations and all the so called human rights organizations.

If World Jewry hadn't considered money as the payoff for the Holocaust, we wouldn't be witnessing Durban II right now.

According to Jewish Law, Teshuva, Repentance is dependent on first admitting sin. That is stage one. 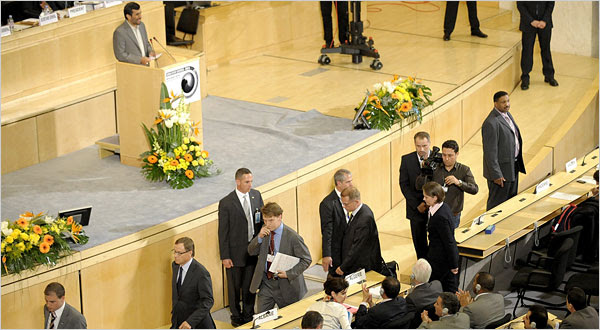 Instead of just walking out on Ahmadinejad's speech, the European countries, the Unites States, Canada, Israel etc should walk out of the United Nations, banish it from New York and stop all the financial support.

The United Nations is a disaster. Without western money it would fold up. And that's what it should do. It's dominated by fascist, racist hypocrites who blame everything on Israel.

The lesson of the Holocaust is that we, the Jews, can't count on anyone, on any other nation or people.

Our strength must come from ourselves,

our unity and G-d.

thanks: not 'perish' but murdered

i don't think the money is a bad thing. but your statement about priorities is important.


the best thing israel can do now, besides essential spiritual work is to eliminate all iranian nulear capability.

Firstly, as a friend of daughters of Holocaust survivors, I know that that money is a godsend to some who are now quite old and feeble. Without that money, they would be destitute and unable to afford medical care.

However I agree with everything you wrote about the U.N. I am not surprised regarding their present hypocrisy. For, I spent a week camped out along with hundreds of other Jewish youth across from the U.N.in 1974 when Arafat was invited to address the assembly and spent time there. Then Arafat; now Amadinadumbo. Same old, same old...

Nonetheless, it is shameful that the American taxpayers fund such a large portion of the U.N.'s annual budget. That means they are giving de facto legitimacy to the U.N.'s disgraceful actions!

Justice is only in the World to Come, though we must continue to fight for it here!

Batya, your eloquent voice is much needed and appreciated! Keep up the good work!!

a and netivotgirl, yes I understand about money being important, but if the moral priorities were correct, the money would come in.

Think of the massive amounts people give to Yad Veshem and other Holocaust memorials. Why can't they support live Jews?

Netivotgirl, thanks for your kind words.

Good term for it, sure better than "perished."

As others have said, I think the word perish is wrong as it could equally apply to people perishing in a natural disaster rather than a deliberate, premediated mass slaughter.

Exterminate is the proper term. Hitler regarded his Jewish victims as little more or even less than insects. Killed without a second thought.

Exterminate is the right term.

You're right, too, about the UN. The US, Canada and the UK should leave. Even the J Witnesses want nothing to do with the UN. They consider it along the lines of an evil empire.

From what I heard on a documentary, they were also the only Christian denomination to collectively condemn the Nazis. No other Christians did. At one point, Hitler offered to release 10,000 J Witnesses if they would stop their condemnation. They wouldn't.

They were among the Holocaust victims. What's ironic is J Witnesses are pacificists and don't believe in getting in involved in government affairs or even voting.

Yet when the stakes were as high as they were during the Holocaust they made an exception. Maybe we should pay attention to their stance on the UN.

Regarding money to protect Jews today who are very much alive--I agree entirely. Money cannot help the deceased but can help the living.

Keli, thanks. I didn't know about the J witnesses; I'm glad you added that info.