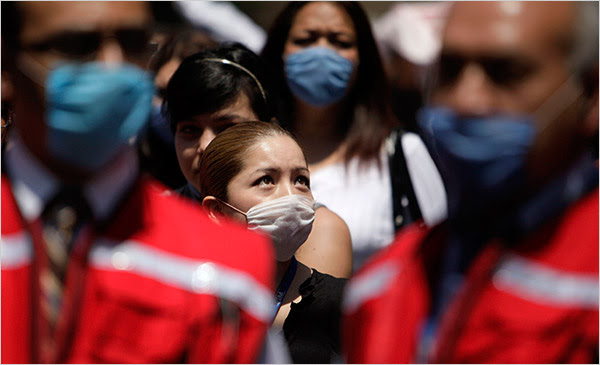 I've been ignoring the swine flu. Maybe, you'd say, because of the name "swine," pig, an animal I, a Torah observant Jew, wouldn't eat. But as news spreads about the spread of the virus to New York, where I have to visit this summer, I've begun to wonder.

Will there be a pandemic? Will it be over by July?

Actually, if I could travel to New York by boat, like we did when we made aliyah to Israel in 1970, I'd feel a lot safer. There's nothing less healthy than an airplane, those flying boxes with recycled air. By the time you land, you've breathed in everybody's exhaled air. Even if it's filtered, how often is the filter changed and what does it filter out?

Is there anything we can do to protect ourselves? Or is this just a panic over nothing?

For the new swine influenza virus, it is too soon to know the answers. And as scientists are all too keenly aware, they have been wrong before.
In 1976, after a small outbreak of swine influenza at Fort Dix in New Jersey, public-health officials persuaded President Gerald R. Ford and Congress to mount a nationwide immunization campaign that came in for widespread criticism. Yet 60 years earlier, an influenza virus that apparently started as a mild outbreak in the spring came back in a giant storm months later.

The swine flu may just be a big nothing, only modern testing techniques have given it such early publicity. Or, considering how much people travel nowadays, it may G-d forbid be horrendously deadly.

Or will the stress and worry over it cause more medical problems than the notorious virus?

A few autists and kabbalists have been warning lately to get out of the US ASAP. Previously, they had been warning to stock up and keep several days of food and water on hand at home, though that is simply smart thinking anyway. Of course, it's easy to criticize those saying the sky is about to fall.

Only God knows where this is going.

Let's just pray that they're wrong. So far most of the people who've gotten the virus have survived. Otherwise it'll be like those movies and tv shows, G-d forbid.