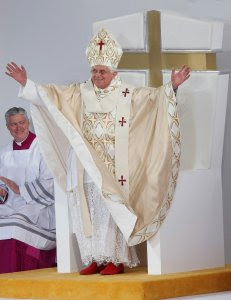 The Roman Catholic Pope Benedict XVI is due to visit Israel very soon. Josh suggested that maybe he'll be bringing one of our Holy Temple Treasures which the Romans stole from the Beit HaMikdash thousands of years ago. I doubt it, because it would admit that they have our property.

Nu? What do you think? What do you expect the pope to bring us? Israel is planning an outrageously disproportionate gift of our Holy Mount Zion.
Posted by Batya at April 27, 2009

Shy, I don't blame him for the tzoros. I consider it our fault. If we, the State of Israel, acted with dignity and common sense, the pope wouldn't dare treat us how he does and will.

The goyim are just a reflection of ourselves. We have a long way to go.

From the peanut gallery...I'm a former Catholic/Christian and so, if I were in Israel and ran into the Pope I'd remind him to stop into a church and do the Examination of Conscience in light of each of the Ten Commandments as all Catholics are required to do before confession.

He (and the Vatican) violated the first three commandments for sure. But I'd make a special point to remind him of thou shalt not steal and tell him to give back what the church stole from Israel. I'd remind him that his own church teaches that many venial sins can become mortal sins.

That would be my speech to the pope:) I would use his own lingo and teachings against him. Hit him right in the Catechism.

Pope Benedict shouldn't be allowed in Israel at all since he refuses to excommunicate and defrock a Holocaust denying bishop. Argentina forced the bishop out of the country. Why should Israel allow the pope who condones the bishop into Israel?

Shalom!
The Pope is unfortunately going to bring more of his kind. As if Yad L'Achim doesn't have its hands overfull with the missionaries already in Israel.
Hadassa

hadassa, so true
Many Israelis will be wowed by the spectacle of their church prayers.

What are we supposed to do with idoloters in the Land? Why not have him be the first?

Is the open arm gesture showing just how much more he desires of wealth before the Arabs get it all? He makes "religion" a naughty word. Hashem himself said, "call no earthly man your father" and how many other commandments has he purposely erred? He should be ignored as if he were an obama politition!

a, I don't know what the pose is for. I saw the picture and used it.

What Batya, smash his idols then kick him out of the country. What's the problem.

Not so simple. The government invited him.

I realize it is not so simple Muse. But the vatican mocks us every chance it gets. So don't invite him, if he invites himself, let him fend for himself. What bothers me is that first, he is a brown shirt in his youth, secondly promotes right in our faces the greatest lie of history. We just buy it and don't as I say, smash their idols. (whenever a xtian or messianic comes to 'convert' me, I literally smash their idol image lie, mangod and then they know not to mess with me). Why are we so afraid as a Nation to stand up with the truth of Torah. Like I said, they can visit on their own. But we cannot and must not recognise officially either of the replacement theologies. Either we believe in the Torah or we don't. It's simple. What is sad, is the others believe in their lies more then we as a Nation believe in our Torah (Tanach). Democracy is our complete enemy as we must revert back to the Torah. Ya, ya, I know, who will run the show. Well, haShem needs to get a movin in that dept!

Of course, if it had been up to me, he never would have been invited.

Nobody should stop him from coming, but there shouldn't be a holiday atmosphere about it. Let him hole up in a monestary and treat us with respect.

Have a look at what the Pope should be doing at http://www.davidranan.blogspot.com

Thanks, I did and commented.