The UN Watch surprised the delegates at the U.N.’s “anti-racism” conference, known as Durban II. The chairwoman kept banging her gavel and interrupting the Arab doctor who had been imprisoned in her country. She kept insisting that he was off-topic.

Here are two videos of it:


And here is the short and clever video produced by Israel to illustrate the vast variety of races living together here in Israel.


Honestly, I don't think the way to influence the United Nations or most other countries is to be "nice" and amenable. No doubt the countries which walked out of the conference in protest were inspired by the fact that Israel, the USA and others didn't attend. 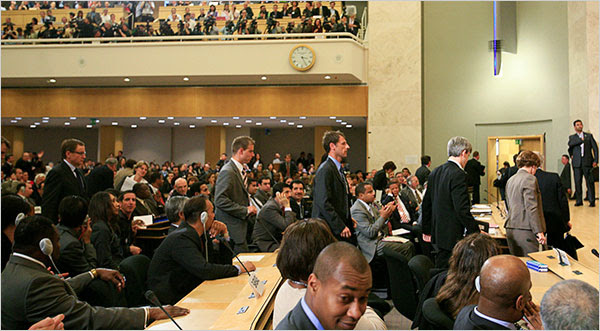 We're better off just cancelling our membership in protest and saving the money we waste. We'd probably make more friends by standing up for our rights and not being afraid of foreign disapproval.

Tonight and tomorrow are Holocaust Memorial Day. What country in the world did anything to try to stop the murder of the Six Million Jews and the millions of others the Nazis decided didn't have the right to live? A few individuals, yes, but not a single country. And yes, that includes the United States which refused entrance to refugees.

After the allies defeated the Nazis, then the Jewish prisoners in the death camps were discovered. Many of them died, because they were overfed, given the wrong foods by the American soldiers.

The message we must understand from the Holocaust is that we are alone, alone with G-d and we can't trust any other country, organization or leader to care about what happens to us.