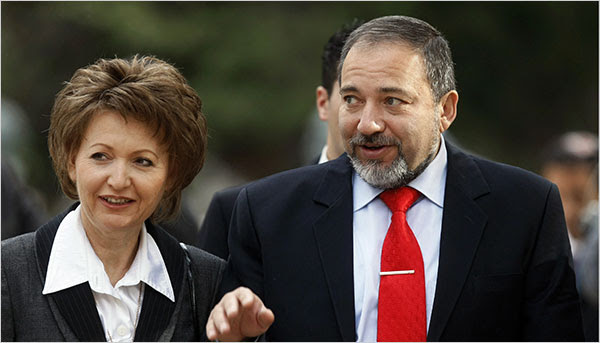 Israeli Minister Dismisses Peace Effort
By ISABEL KERSHNER
In a belligerent speech on his first day as Israel’s foreign minister, Avigdor Lieberman declared that “those who want peace should prepare for war.” (Click title for complete article)
Egypt to boycott Lieberman unless he apologizes
FM said in October that Egyptian president "can go to hell..."

I sincerely hope that Israel's new Foreign Minister brings in his own staff and is immune to the usual brain-washing of high government officials.
Too many times in our history, we've elected strong, patriotic politicians and then discovered that Loony-Left wing dybbuks had taken over their brains.
I'm certainly not a Lieberman fan, but considering the rest of Bibi's bloated cabinet, he's like a breath of fresh air. Now, of course, he's saying the right things, at least as far as I'm concerned.
A fawning Foreign Minister is the last thing we need. At this point, the world is nervous. That's good.
I hope and pray that Lieberman doesn't suffer the same insecurities and inferiority complexes our other politicians in high office have suffered from. I trust that he's bright and intuitive to understand that he received most of his votes from people who liked his straight-talking about security and loyalty. Bibi Netanyahu and the Likud wimped out on it, and the Ichud Le'umi (National Union) hasn't a fraction of the charisma Bibi and Lieberman are gifted with.
The NU's new MK Michael Ben-Ari has managed to grab headlines with statements which make Lieberman look like a moderate. That's good, and that's Ben-Ari's role. No matter what the PC's may think.
Israeli politics is never dull. I hope that this new government will be a good one for us, G-d willing.
Posted by Batya at April 02, 2009

isnt it possible that all these rightists who turn more left when they reach high positions in government turn that way because they now see things you and i dont?

I could be that they chicken out of defying the world. And there's always the "Yes, Minister" factor.

you seem to get a particular thrill out of defying the world.
all within the confines of other world-defyers...
how about being a little original?

I don't know if "getting a thrill" is right, but I'm not afraid of the world, for sure.

to the 1st Anonymous poster --- Yes, I think it's possible that rightists who turn left when they reach a high position in government turn that way because they now see things you & I don't. But not the sort of thing you're referring to. I think (conspiracy advocate that I've become) that they're being threatened by the left -- threats either to them or their family or to the nation. Try rereading history of the last ten years or so with that idea, and everything begins to make sense.

Chava, yes, that's possible for some. For Menachem Begin, it was trying to prove to the world how nice, diplomatic and non-terrorist he was, so he gave Moshe Dayan carte blanche.