Farms and agriculture have been destroyed by the Arab Gazan Hamas terror kites.


Various sites and communities in the Eshkol Regional Council and the Sha’ar Hanegev regional council were hit by the kites, including Kissufim, Nirim, Miflasim, Ein Hashlosha and Nir Am.KKL-JNF staff and national firefighters managed to gain control over the fires.KKL-JNF said Tuesday that it intends to sue Hamas in international legal court for the severe environmental damages that were caused to KKL-JNF land in the area surrounding the Gaza border from rockets, mortar shells and incendiary kites launched from the enclave into Israel.

This is the truth, not that the world, international media, NGOs etc care. 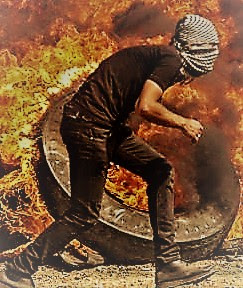 Friends who live in the south of Israel have been reporting sleepless nights, as they are frequently awakened by security alerts which order them to get to safe rooms within seconds. There are also the sounds of fighter planes buzzing overhead day and night. They try to guess if the bombing they here is from an attack by the Arab Hamas Gazan terrorists against us  or our defensive acts.

Fields and orchards have been burnt by the Arab kite bombs, clever photogenic weapons celebrated by Israel's enemies.

The Arabs don't love this Land. They just love to destroy it and anything they can associate with Israel and Jews.
Posted by Batya at June 07, 2018

This is the payback we get for tolerating the annual
Israeli "Gay Pride Parade". To permit that parade
even one time is slapping G*D in His Face;
to make it into an annual event is much worse.

This is the payback we get for accepting homosexual
Arab refugees from all over the Middle East.

This is the payback we get for accepting into
Israel 100 Arab refugees from Syria, whose
ancestors persecuted Syrian Jeww for 1,400 years.

May G*D decree eternal damnation in Hell against
the Europeans who take the side of the terrorists
against the only democracy in the Middle East: Israel.
They should all be sent to a place in Hell where
they will be eternally persecuted by the Muslims who
they defended and funded and voted for in the U.N.

The Palestinian Connection to the Nazis
by Wolfgang G. Schwanitz, 2017 May 14
www.algemeiner.com/2017/05/14/the-palestinian-connection-to-the-nazis/

How a pro-Palestinian American reporter
changed his views on Israel and the conflict:
by Hunter Stuart, 2017 February 15
www.jpost.com/Jerusalem-Report/A-view-from-the-frontlines-480829

Dismantling the Palestinian Lie
by Yaakov Menken, 2018 May 25:
https://cross-currents.com/2018/05/25/dismantling-the-palestinian-lie/