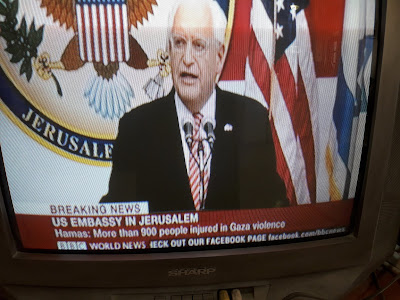 Yesterday was a day that should be treasured, not for what it did for Israel, but what it did for the United States of America. As American President Donald Trump and others stressed, the official recognition of Israel's chosen Capital City, Jerusalem, should have been made seventy 70 years ago. 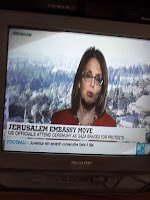 I was one of the many millions all over the world to watch and listen to the ceremony. It was a very wise decision to do simple "sign-changing," which produced an "instant embassy" in the rather new consulate building, so the official opening wouldn't take years to be a reality.

The main theme in most of the American speeches, including the prerecorded one by Trump, was that the State of Israel, like all other countries has the exclusive right to decided on its Capital City.

Even though my husband and I made aliyah just weeks after our wedding, almost half a century ago, we are still American citizens. And we have friends, who like American Ambassador David Friedman straddle their loyalty to the United States and love for Israel. I kept wondering how Friedman felt as the MC of the ceremony. If he writes his memoirs, will he say that it was the high point of his professional and personal lives? How much of this "instant embassy" was of his doing?

We in Israel never doubted that Jerusalem is our Capital. The change by the American Government is for its benefit, not ours. Gd gave us this Holy Land, and three thousand years ago, King David chose Jerusalem as our Capital City.

I thank and praise the G*D OF ISRAEL
for this step in the correct direction.

May He decree abundant steps in the
correct direction, and very soon.

The Biblical Book of Daniel, chapter 6, verse 11,
clearly states that the righteous Jew Daniel prayed
towards Jerusalem, three times a day, every day.

The Jewish Bible mentions Jerusalem more than
650 times, but this verse has special importance
because it proves that Jews had a special
connection with Jerusalem, even when they
were exiled to foreign lands.

For more about this, go to: