It's hard to categorize the newest venue in Jerusalem's Old City, the Plugat Hakotel. It's called a "museum," but there aren't really any exhibits. And unlike most every other museum, there's no walking around, so it's very good for those who find standard museums difficult to handle. 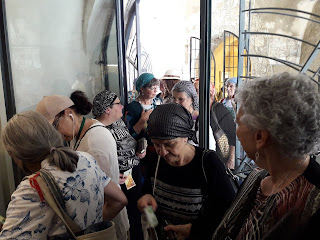 The Plugat Hakotel Museum is in the building of the historic Plugat Hakotel, on Rechov Hayehudim near the corner of Plugat Hakotel Street, where the patrols that protected Jewish worshipers at the Kotel almost a hundred years ago were quartered. The street level rooms have been set up to show a very good historic reenactment movie, which tells the basic story, fictionalized of course.

Yesterday I went to the Plugat Hakotel Museum with a group of friends from all over the country. It's best to call in advance to book a time slot. 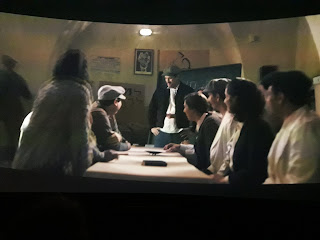 We saw the English dubbed version of the movie which had Hebrew subtitles. It is very well written and acted and tells how members of the Betar Zionist youth movement, inspired by Zeev Jabotinsky worked together to not only guard Jewish worshipers but risk jail time by blowing the shofar at the end of the Yom Kippur fast. Yes, the British forbade shofar blowing.

For me this building has special meaning, because it was our first home in Israel, Maon Betar. We knew the history of it, but at that time, the Old City was undergoing major repairs to make it more habitable and modern. Just now, a half a century after being liberated from illegal Jordanian occupation has the museum been opened.

All Jews, especially those who live in
the Land of Israel, should thank G*D
that we have free access to the Kotel.