No Room on Ariel Buses

Yesterday afternoon I was pretty lucky. Only one overfull bus bypassed/skipped the Tzomet Yarkon (Junction) as I waited for a bus to Ariel. I noticed from the computerized bus sign earlier in the day and my public transportation phone app that buses are more frequent than previously, but they were still full of Arab workers at 4pm. Besides the Israeli public transportation, I saw Arab vans picking up Arabs at the bus stop.

After another few minutes of waiting, a #286 stopped to let off passengers. I could see that there were some passengers standing, but I went to the driver's door anyhow. She, yes a female bus driver, let me in. I paid and was about to sit on the stairs when I noticed a young woman signalling me that she was giving me her seat. She and an older Arab got up for me. I got in, and then they each insisted that the other sit with me. In the end, the young woman did.

Looking around I didn't see any other females, just us and the driver. And I only heard Arabic being spoken. The bus was packed, and the driver skipped all the stops, since nobody rang to get off. It's against regulations to have passengers standing in the aisle. 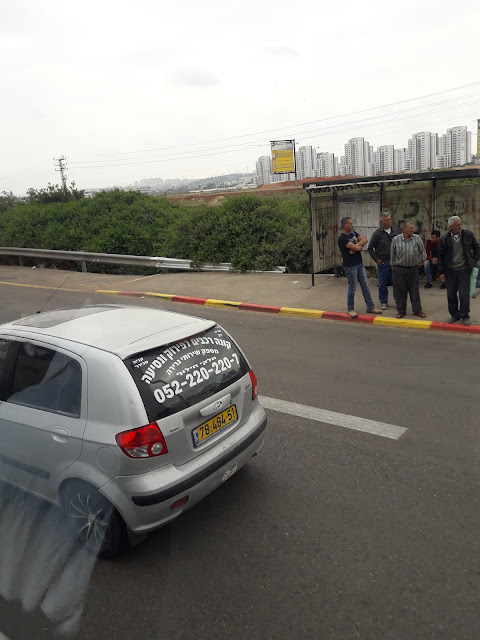 But at the Oranit/Elkana Junction stop, a couple of young Jewish women got off from further back. And then a few stops later, the bus pretty much emptied out at the last stop before Ariel. Only a handful of us remained on it as it entered Ariel.

I got off at Ariel University and then waited for a ride home to Shiloh. B"H, three rides later I got home safe, sound and relatively quickly.
Posted by Batya at May 14, 2018

Based on blog articles that you released
over the past year, it seems that you often
ride buses where you are surrounded by Arabs.

I suggest that you take a Sefer Tehillim
with you, and that you recite Tehillim
non-stop, at the bus stop and inside the bus.

I recommend THE METSUDAH TEHILLIM
by Rabbi Avrohom Davis.
I believe he made aliyah from the NYC area.

If you can't get THE METSUDAH TEHILLIM,
then I recommend the ArtScroll Tehillim.

If the Jewish people observe Shabbat
[the Jewish Sabbath] then Jerusalem will
be ruled by Jews forever (verses 24 to 25).

But if Jews DO NOT observe Shabbat,
then the Land of Israel [literally, Jerusalem]
will burn with fire (verse 27, last verse of chapter).

Based on Jeremiah chapter 17, it seems possible
that the real reason why so many nations want
to take Jerusalem away from Jews is because
many Jews DO NOT honor Shabbat.

If Jews intermarry with non-Jews, then He
will NOT help the Jews conquer the
Land of Israel. And even worse, the sin
\of intermarriage will cause the Jews to
be driven out from the Land of Israel.

Based on Joshua, chapter 23, it seems
possible that the real reason why so many
nations want to take the Land of Israel
away from Jews is because many Jews anger
G*D by intermarrying with non-Jews.

I dovened Mincha and said Tehillim.