Roseanne, Aliyah Would be Great, But Forget PM

Apparently, the irrepressible Roseanne has announced that she'd love to join her people in Israel and even become the chief aka Prime Minister.


“I want to make aliya, I do, and before all the stuff is sold – all the real estate,” she said. “I still have this fantasy of being an old Jewish lady living in the Jewish homeland... I want to buy a farm there and maybe bring my family.”Of course, Barr won’t be moving just yet, since she just signed on to another year of her smash hit TV show, the revival of Roseanne. Barr said it’s true she committed to another year “but you never know what’s going to happen.”Weiss asked Barr about the phone call she got from US President Donald Trump after the premiere of her show scored excellent ratings.“He said ‘Congratulations on the ratings.’ He’s really into ratings like I am,” said Barr. And then the actress said she had a message for Trump – to thank him for his decision to move the US Embassy to Jerusalem.

Being the rare TV star who not only supports US President Trump, but Roseanne Barr says so on nationwide television. The PCs don't seem to scare her. 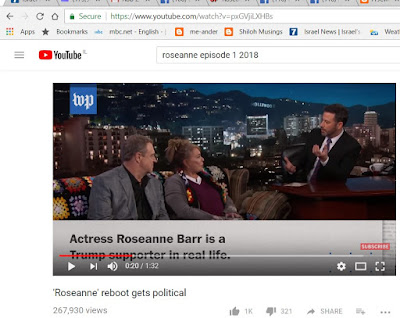 I guess Roseanne looks at the real numbers, like the fact that although all the pundits and most polls had predicted an easy win for Hillary Clinton, it was Donald Trump who won the most recent United States Presidential Elections. So, nobody should be surprised that her revived television series is a hit. More Americans agree with her than the media and Hollywood care to imagine.

Roseanne would feel at home in Israel, though I hope that her talks of getting involved in running for the Knesset, which is the only way to be a Prime Minister, was just for the headlines. Like all Jews, she should make aliyah, Gd willing.
Posted by Batya at May 01, 2018

Why does it matter why the likes of a "Roseann" say anything? She is just another 'actress' - their whole lives are an act. She is what you call the personification of an unJewish 'Jew'. She tries to convince everyone she, all of a sudden, awakened to some kind of truth. She has always been a leftist. She would have to make so much teshuvah in order for her to take the 'un' out of Jew.

Sorry, but with all due respect, aliyah
is NOT a spiritually-valid option
for Jews who do not obey mitzvoth.

Roseann does not eat kosher,
does not observe Shabbat, and
was active in the Mormon Church and
married a non-Jew, and in general,
is not observant.

Biblical verses which teach that these
sins anger G*D and cause Jews to be exiled
from Jerusalem and the Land of Israel.

Just read the short blog articles,
shown below, to prove that.

Aliyah is for all Jews.

There are a number of agendas these days. What is her agenda? That is the question. Most of her life she acted and behaved in a complete opposite manner and don't think she had any love for Israel, Judaism, etc. Now she is an advocate for Israel and would even like to may Aliya. Doesn't sound right. Miracles do sometimes happen, but .......

Let her make aliyah. She wouldn't waste her time with politics