As a student of the Bible, who has very little back knowledge and an awful memory, I sometimes find my mind going in strange directions during classes or when thinking about what I've learned. Last week I found myself writing the following note: 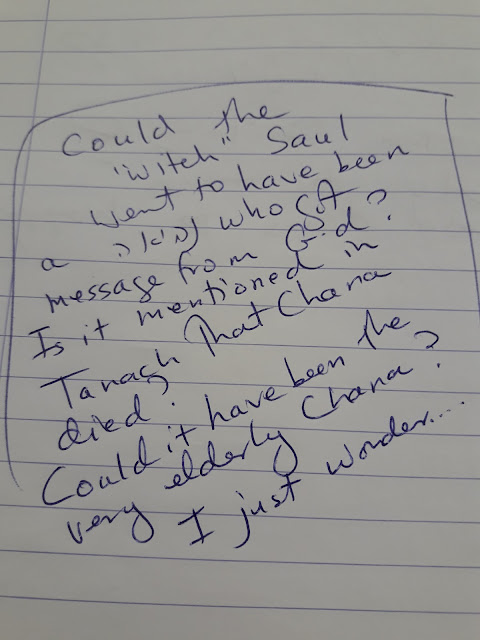 The day before my chevruta, study group had gone over the account of King Saul's visit to the witch/fortuneteller, 1 Samuel, Chapter 28. Chazal and midrash have a lot to say about the woman.

Did she really conjure up Samuel The Prophet, or did she just fake it?

Considering that her/Samuel's prediction was on target, totally accurate, that King Saul and his sons would die in battle, gives it all a spooky  legitimacy. Add to this the similarity to Samuel's very first G-d given prediction, when he was told to tell Eli the High Priest that Eli and his sons would all die ending their ruling dynasty. For some strange reason, it popped into my head that the woman was Chana/Hannah, Samuel's mother. No place in the Bible tells of her death.

Asking ordinary people what they think
is a big mistake, for many reasons.

It is like asking random strangers
from the NYC subway to perform surgery
or prescribe a medicine.

Agree with Mr. Cohen on this. That is why we have the commentaries; this is where the Oral Torah comes in to explain all that we cannot understand from both the five books of Moshe (Torah) and the Neviim (Nach).
Also, we do know that the Ruach HaTumah does exist. There were sorcerers in those days who had great power, but on the impure side. Bilaam was probably the greatest of them and his sons were Pharoah's magicians in his court, and who left with the rest of the Erev Rav from Mitzrayim together with the Israelites (thus, we see where the bad guys come from). H' gave ten measures of black magic to the world and nine of them were given to Mitzrayim.

According to the Midrash Yalkut Shimoni, the woman was the mother of Avner, the principal general for Shaul.

Actually I first asked some of my Tanach teachers. And nobody has an answer about Chana's death.

What Ed said sounds very similar
to the answer that I remember.