In the Israeli Election System, one votes for political parties, not for individual candidates.
The leader of the party getting the most votes, after the one-hundred-twenty seats of the Knesset are calculated, generally becomes Prime Minister.

In at least one case, which I remember, the second largest party became the ruling party. That's because Israeli Governments are coalitions, and the leader of the largest party was incapable of forming one. You have to be a very skilled negotiator/politician to be Prime Minister of the State of Israel.

That's why I never take seriously those who state "-- would make a great Prime Minister," because of some clever or even super intelligent idea/policy/article etc. Being Prime Minister of the State of Israel is not for political amateurs. It's a super complex job, which not only includes the complex political situation in Israel but the super-complicated status Israel has internationally. 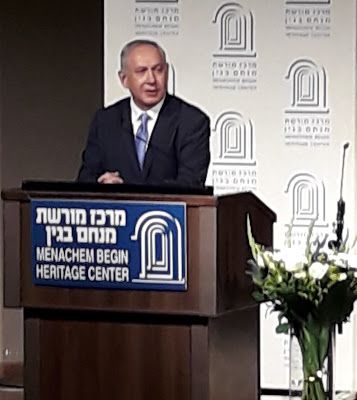 Even with all the complaints, and there are many, I have against Prime Minister Binyamin Bibi Netanyahu, it's impossible to imagine who can fill his well-crafted shoes.

The tiny State of Israel is a or the world leader, and many Israelis recognize this.


LIKUD POLLS AT RECORD HIGH AFTER TRUMP DECISION
The poll found that if an election were held now, Netanyahu’s Likud party would rise from its current 30 Knesset seats to 35, up from the 28 predicted by the same pollster just two weeks ago on April 23 and the best the Likud has fared in Midgam polls in a decade.

"In the Israeli Election System,
one votes for political parties,
not for individual candidates."

Maybe that should change.

Even more important, something must
be done about Israel's very-far-Left
Supreme Court.

They have way too much power, and
they are out-of-touch with what the
average Israeli wants and believes.

Why do we have to confirm Einstein's theory on how to define insanity?

I respectfully disagree on the current PM. We do not need or want to keep doing the same things over and over again. We are in this Iran mess because he was unable to make the right decision as the leader of this Jewish nation.

He deferred as he always defers to pressure from the West. He let Barack Obama decide how to proceed with Iran. He freed terrorists over and over again. Jewish houses continue to be destroyed. It was the PM would delayed the American Embassy from moving to Jerusalem. Persecution of religious Jews picked up speed. He took the cameras off the Temple Mount for G-d's sake!. He didn't stand up for Elor Azaria. The bodies of Hadar Goldin and Oron Shaul are still in Gaza!

Evangelizing xtians are crawling all around Knesset shmoozing, praying, studying the Bible with the MK's, working with the PM, buying property, picking our grapes and praying to a dead Jew in the vineyards of Judea and Samaria. But Jews can't even afford to buy houses! Everything in Israel is ridiculously expensive And that's only half of it!

This PM reminds me of king Shaul who was commanded by the King of Kings to destroy Amalek but was intimidated and influenced by the people to take pity on Amalek and save the king and the spoils. Samuel told king Shaul, " Though you are small in your own eyes, are you not the head of the tribes of Israel?"

Yes, I know what you and others will say. No chance, they won't get enough seats. Did the people think King David would be mashiach, King of Israel back when he was out grazing the sheep? L'havdil. Time to make a change and get off the merry-go-round. Time to move forward away from the Erev Rav leadership that has a stealth war on Jewish Identity and Judaism. Israel is a Jewish State, not a state of its peoples!
ENOUGH WITH THE STATUS QUO!

Mr. Cohen, if you've read the news, you'd know that a law is being worked on to limit the authority of the courts to defend the Knesset and not veto it.

Moriah, as I said Bibi isn't perfect in my eye at all, but so far there isn't anyone competent to replace him, meaning that there isn't a party that has a leader who can pull it off. It will take time. Bibi was defeated after his first try as PM, but then he came back and has gotten stronger and stronger.