Should The State of Israel Take Advice/Orders?

When I opened the computer tonight after Shabbat I saw this headline:

All I could think of was that the last thing the State of Israel should do is to pay attention to Europe's opinion. They are pro-Arab and anti-semitic.

And the United States isn't much better. Even the Jewish organizations don't know what's best for us. Caroline Glick's latest article is a must-read:

AIPAC’s mission to cultivate and maintain bipartisan support for Israel in the United States is an important mission. Unfortunately, the messages AIPAC’s leaders delivered during the organization’s annual policy convention this week in Washington indicate that they are at a loss for how to achieve their mission in the contentious political environment now prevalent in post- Obama America.

Their befuddlement is not surprising. For the eight years of Barack Obama’s presidency, AIPAC’s leaders showed a consistent inability to understand the challenges they faced. And since they were unable to understand how or why the Obama administration was undermining AIPAC, they couldn’t protect AIPAC or advance its mission during his tenure in office.

At this week’s AIPAC convention, the message emanating from the speeches AIPAC’s senior leadership delivered was that they still don’t get what happened.

And largely as a consequence, they do not understand the challenges they face as an organization moving forward. And again, since they don’t understand what happened, or what is happening, they are incapable of meeting today’s challenges to AIPAC’s mission in a constructive way... Click for complete article 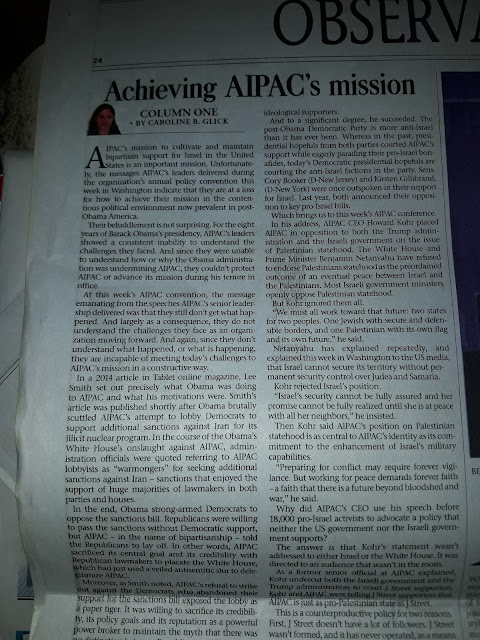 Since Rabbi Aryeh Kaplan (of blessed memory) taught that
in the era before the mashiach, the Jews in
the Land of Israel would only have partial independence,
there is no point in complaining about Israel sometimes
bowing before other nations, nor is there any point
in blaming Prime Minister Netanyahu for melting before
those who hate us, because that is exactly what is
supposed to happen to Jews in the era before mashiach.

MICROBIOGRAPHY:
Rabbi Aryeh Kaplan was an Orthodox Rabbi who
lived in New York City from 1935 CE to 1983 CE.
During his relatively short life, he wrote
approximately 60 books about Torah topics,
including the English translation of
Yalkut Meam Loez, which is around
20 hardcover volumes. He was listed in
THE WHO’S WHO OF AMERICAN PHYSICS.

How can we expect G_d to grant Israel complete independence,
when most Jews in Israel DO NOT observe Shabbat?

How can we expect G_d to grant Israel respect from other nations,
when Israel’s universities are dominated by atheist professors,
who ridicule belief in Torah?

The truth is that no nation has the right to 'order' another nation about anything; unless it is a rogue/evil nation that wants to destroy and conquers others. Giving and taking advice is usually not a bad thing, as both nations and individuals can use that.
The SOI has not really been independent nor sovereign from its beginning. Also, the galut mentality has never left the people and truth be it, the state was created and started by non-believing Jews who had a different mentality than the true original Jew. These leaders, many of which, are from the Erev Rav and want a different 'Jewish' state than H' wants! Until Moshiach is here, guess this is what we have to put up with, because anyway no one ever seems to have the power or will to change it.

We won't be ready for the Moshiach until we can tell other countries "what to do" with their "advice."