There's a very simple reason I haven't been blogging much about Israeli politics. It is getting boring and tedious. Jeremy has posted two recent polls, which show rather predictable trends. Both polls use the same basic number of respondents, just under six hundred 600. I'd consider the margin of error rather large, and since no new "savior" has appeared on the scene... Also, even though the media and police are doing all they can to find something corrupt/jailable about Prime Minister Netanyahu, he still comes out #1 in the question:


"Who is the most suited to be Prime Minister?"

So, I will copy/paste the two polls and follow it with a bit of my commentary:

One thing for sure is that the Likud will end up getting some of the Bayit Yehudi votes. It happens every time. In the final day before elections, Bibi will send out urgent announcements/warnings claiming falsely that "the Likud must have more MKs to form a coalition. If people vote for Bayit Yehudi, then X will be able to form a coalition instead." Of course, he omits the simple fact that it's the sum total needed to form a government, and that the smaller he can make Bayit Yehudi the more power he'll have over it. If Bayit Yehudi is larger, then Bibi will have to give in to its coalition demands.

If you look at the first poll, you'll see that Lapid and "none of the above" are almost tied for 2nd 3rd place. But all they have is really just over half the support and trust that Bibi has. And Bibi is constantly the butt/target of police and media accusations of corruption. After all the efforts the police have made to find something to charge Netanyahu with, they're looking rather desperate and even corrupt, if you follow. I suggest reading Caroline Glick's recent article, Defending the rule of law.

Looking at another section of both the polls is very interesting. Both polls show Shas as just under the minimum threshold to be represented in the Knesset, and both show an increase in the Yahadut Hatorah (UTJ.) My guess is that as the chareidi-style sephardim mature into second generation, they are more comfortable in chareidi society and now look at and vote as in the "big picture," as chareidim, rather than sephardim.

One last thing. If you're ever invited to the Prime Minister's Residence, don't bring a consumable "house gift," such as cake, candy, wine or cigars. You may be charged with bribery... 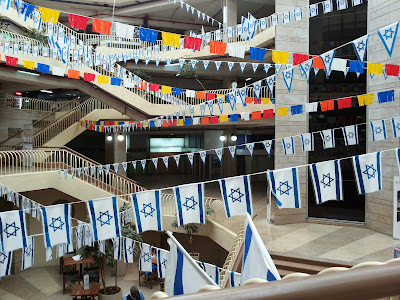