Do We Really Need to Buy So Much Passover Stuff? 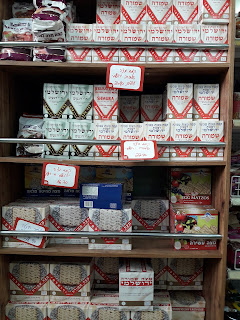 The other day I saw a post on facebook unfavorably comparing the Israel Passover food selection without kitnyot, legumes which Ashkenazi Jews have a custom not to eat on Passover, to what one can buy in the states. The person claimed that it was easier to find Kosher for Passover non-Kitniyot food in the states than in Israel.

In the facebook discussion that followed, one person couldn't understand what the fuss was about. "We can manage with simpler foods for a week." That is very true.

Other people seriously doubted that the data was true.

I mentioned that the Israeli Jewish Population has a high proportion of Sfardim; they can eat kitniyot. There's less of a market for the non-kitnyot foods. 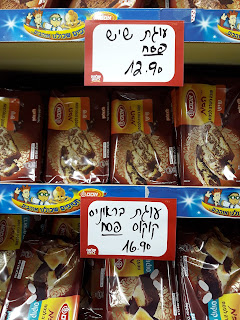 One thing that wasn't mentioned, at least earlier in the discussion, was that there is a great improvement in the choice of non-kitniyot foods compared to a few decades ago.

When we made aliyah close to fifty 50 years ago, not only was the selection poor, but the labeling was awful. Now it's so much easier.

Just remember to cook simply. The holiday is just a week long. Enjoy in good health.

Most Orthodox Jews are aware of kosher-for-Passover Coca Cola.

Recently, I read a book which claims that the reason
for kosher-for-Passover Coca Cola is that regular
Coca Cola contains corn syrup, which is a derivative of kitniyot.