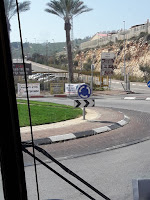 Migron is/was a quiet community in a great location, just off Highway 60, north of Sha'ar Binyamin and the turnoff to Psagot, Kochav Yaakov and Tel Tzion, across from the southern end of the Alon Road. It's not far from Jerusalem, and many young families were living there in temporary homes. But instead of building permanent homes, a nuisance case was brought by Peace Now, the anti-Jewish settlement group claiming to represent "true Arab owners*," and the Israeli Lefit courts ordered Migron to be destroyed and moved.

In compensation, the government promised that the residents would get a new totally approved location, and while waiting they would be set up in state of the art caravillot (temporary prefabricated homes) nearby. This "temporary" setup has been going on for quite a few years already. The community set up a large electric sign, which you can see below. It shows the amount of days Migron has been waiting for a new location and permanent homes. 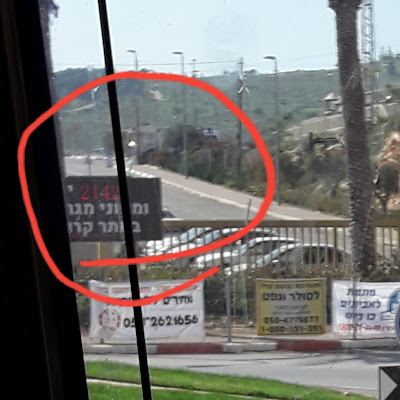 Yesterday when I passed by the number had reached 2,142 days exiled and waiting. That is why so many of us do not consider the present Israeli Government coalition to be Right, pro-Jewish rights/settlement. The truth is that we have no one to vote for. The most reliably pro-Jewish rights/settlement party is Jewish Home, but the coalition agreement/conditions really ties the hands of the more dedicated Knesset Members. Bibi sure knows how to write a very tight contract, and nothing can be done effectively by a party out of the coalition.

The real problem is that the Israeli High Court makes policy according to the judges' ideology and doesn't decide according to law. Justice Minister Ayelet Shaked, Jewish Home, is trying hard to change this, but it isn't easy and will take a long time.

*The so-called owners had been offered land by Jordan on the condition that within a certain period of time they developed it. But prior to the 1967 Six Days War, when Jordan was illegally occupying land west of the Jordan River until the Israeli border, they did nothing to make the areas habitable. Nobody was interested in living or investing here. The "gifts of land" were considered worthless. All of the modern infrastructure, electricity, water, sewer, telephone etc have been built by Israel, post Six Days War.
Posted by Batya at 6:23:00 AM

Being Jewish includes many difficulties and problems.
In my humble opinion, the worst problems are
the traitorous anti-Jewish “Jews”.

I am sick and tired of seeing the most
traitorous Jews with an abundance of
money and power, while righteous Jews suffer.

Reform Jews ally themselves with the anti-Israel
Far-Left and the anti-Israel Intersectionality Movement,
so it is correct to publicize these short
blog articles that expose Reform Judaism:

Those rescue efforts were led by Orthodox Jews,
who the Reform Jews considered to be behind-the-times
and obsolete and an embarrassment.

The Reform Jews got what they wanted:
the rescue efforts failed.