Lesson of Noach (Noah) Being Socially "Inept" can be Good

Noach, just like the rest of us, wasn't perfect, but he stood out from his neighbors because he did the best he could to follow Gd's will. Noach was different from everyone else, and so were his descendents.

Unlike in the stories of Abraham and Yona, Noach didn't argue with Gd, and Gd didn't instruct Noach to warn the other people, ask them to repent. This is a very serious difference. Even though many years/centuries had passed since Gd created man,  Noach was still in the earlier generations, and maybe there was a genetic difference in Noach from the others of his generation.
While the others were more connected and socially/emotionally dependent on each other, Noach was a loner, maybe even a bit "autistic" socially inept or oblivious to what was going on. That is what kept him away, made him immune from the perversions of society.

Noach wasn't what's called in Hebrew ראש גדול Rosh Gadol, Big Head or one who sees steps ahead and takes the initiative.
What Gd commanded, Noach did. No questions asked. Being "Socially Inept" is a safety valve. It saved Noach and his family. He was attuned to Gd and not to society.

At present the State of Israel and the Jewish People can use some of that "ineptness," lack of focus on what the world wants. We should just be focused on what Gd is commanding us, because our Salvation will only come from Gd Almighty and not from the nations of the world and their perverse values. 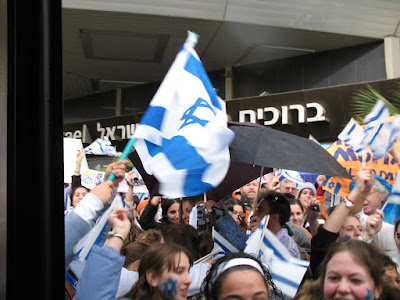 Email ThisBlogThis!Share to TwitterShare to FacebookShare to Pinterest
Labels: Parshat Shavua, Torah Portion of the Week

Beautifully said. Obsession with being like the nations is dangerous for us.
Shabbat Shalom.

A wise person learns from all. Take what is good from the Nations, like those with manners, like those have respect for others. Talking with kiruv rabbi's, they admit and know that halachah does not address some of these issues nor teach our Nation about it. But we are too arrogant to learn from others when our own derech has been corrupted. Thankfully the coming messiah will bring the redemption to the World, taking what is good from them and disposing what is bad from us all.