As Arab Terror Increases, What Helps?

From the news, it's pretty obvious that the Arab terrorists are getting more active again. The big question is:

A while ago, the government began to place soldiers at various bus stops and trempiadas, places where people wait for tremps which are outside of "gated" communities and towns. 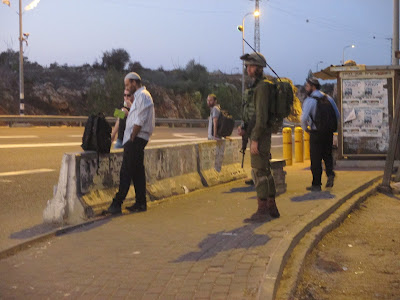 Thank Gd, it's mostly a boring job. I hope they are equipped with lots of sunscreen, since standing in the sun hour after hour, day after day, is usually the most dangerous part of the job.

Again, unfortunately, like with many of the government's policies, it won't stop terrorism. At best the soldiers won't be injured, and they will manage to eliminate aka execute the terrorist on the spot.

Very frustrating for all of us, and no doubt that most soldiers find the assignment excruciatingly boring.
Posted by Batya at November 02, 2016

Thank God for our wonderful soldiers. A thankless job at times, but tell them thank you with a smile when you see them.