It seems like nobody is neutral about Israel's Prime Minister Binyamin Netanyahu. Israelis either love him or hate him, especially the media.

Netanyahu and Media in Open War, a Visit to the Market Shows

Analysis: Prime Minister snubs hostile press on visit to Mahne Yehuda market, but media hits back with a fabricated story.


And although is obviously United States President Barack Hussein Obama's nemesis, there are prominent Americans who would rather see Bibi as their President instead of Obama. 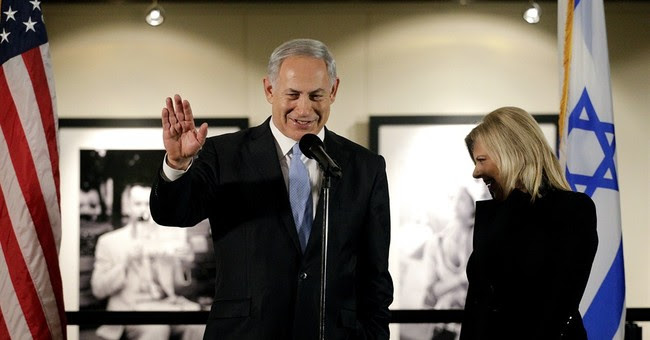 Wasn't that refreshing? Don't you wish we had Benjamin Netanyahu as president, instead of Obama? I took a sampling among my friends- all smart, educated business owners. Men of substance. Every one of them said if they had a choice, they'd choose Bibi over Obama for president…of the United States.

I'm probably as close to "neutral" about him as can be. I'm not a "fan," but I don't see anyone else capable at this stage in time to be Israel's Prime Minister. No doubt it is this unmistakable popularity that Netanyahu has in the USA which is a main reason why Obama and crew hate him so much.

The Israeli Left, Herzog, Livni, the media etc worship the United States and are running scared. My guess is that the election results will depend mostly on voter turnout.
Posted by Batya at March 10, 2015