When I Hear of Givat Harel and Shvut Rachel, I Think of The Murdered Victims of Terror

The other day, just as I got off the bus at the "city line" between Jerusalem and Benjamin Regional Council, a car stopped and the driver said:

My mind immediately pictured Harel Bin-Nun, HaYa"D, as a young boy. He wasn't all that much older than the youngster in my head when for the second and last time he was a victim of Arab terrorism. That's when he and his friend were brutally murdered while doing guard duty in Yitzhar, north of Shiloh.  A few years before that he was very seriously injured when Arab terrorists shot up a bus full of women and children on their way to a demonstration to request to then Prime Minister Yitzchak Shamir to be strong during the Madrid Conference and not to let any country browbeat him into dangerous concessions. After his murder, his older brothers established the community of Givat Harel just northwest of Shiloh in his memory.

The driver let me off at the Shiloh Junction and immediately there was another car that stopped for me.

And then my mind went into overdrive as images and memories of my friend Rachella Druk,  HaYa"D,  flooded to my brain. We were neighbors; our children friends. I taught most of her daughters, and she took care of one of my sons and later taught one of my daughters. We cared about many of the same things. Rachella was murdered in the terror attack in which Harel had been shot.

Arab terrorists didn't want our message to get out to Shamir. Yitzchak Shamir should have understood that Rachella's death was proof that we had no "partner" to negotiate with. And here we are over twenty years later and many Arab terror attacks and Jewish victims later, and successive Israeli Governments refuse to accept the hard fact that try as they may there is no way to negotiate peace with Arab terrorists.

Now, over a week since the three teenage boys were kidnapped by Arab terrorists, nothing has changed.

Please pray for their safe and speedy immediate return! 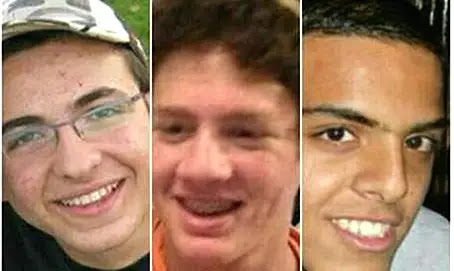 My prayers are with the boys and their families and friends. It could happen to anybody...