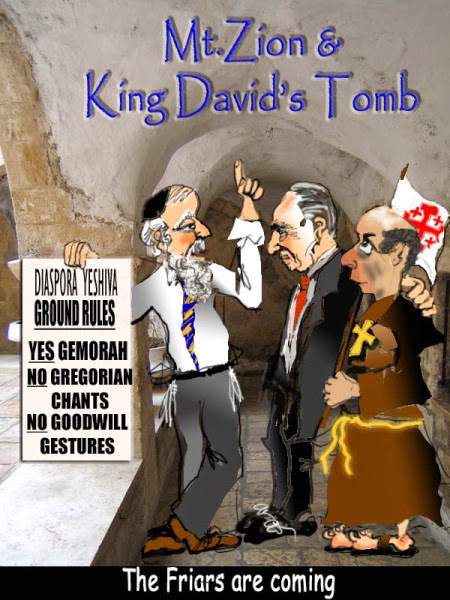 Only one day after the Pope’s interfaith prayer for peace at the Vatican in Rome, reports appear to indicate that regular Catholic Mass has begun in the Cenacle Room above King David’s Tomb, located on the Diaspora Yeshiva campus on Mount Zion in Jerusalem. This despite a rash of Israeli government denials that came in the wake of Pope Francis’s visit to Israel two weeks ago.
There are a lot of unanswered questions, for example:
Why is it that Franciscan Friar Pierbattista Pizzaballa, a man who lays claim to the Cenacle Room above the King David’s Tomb and other properties in Israel, was so visibly involved in every aspect of the Pope’s "non-political” interfaith prayer ceremony at the Vatican yesterday?...more
Posted by Ellen at 11:37:00 PM

Ellen, thanks so much for posting this. The news is bad, but it proves that Bibi's government isn't trustworthy at all.

Look to Israel's Foreign Ministry, as they have been seriously negotiating with the Vatican over the Cenacle ("Last Supper room") since 2000 (I believe Peres held the position of Foreign Minister at that time).

But it was in 2012 that Daniel Ayalon, serving as Deputy Foreign Minister, reportedly cut a deal with the Vatican in which the Vatican would waive its demand for sovereignty (ownership) over the site in exchange for Church access and rights to conduct regular Mass there. According to reports, a leasing option was being considered and the Franciscans were to receive "administrative control ".

Ellen, this is very upsetting. All we managed was to delay it.

Delays and buying time are not a bad thing, as long as one knows how to put that extra time to good use. But there was a lack of coordination, communication and funding among the parties interested in preserving the area.

And those who were warning about the Vatican's designs for Mount Zion were dismissed as being fanatic and over-the-top. Add to that the games the Israeli government played with the public on this issue.