Over a Week has passed since the Three Boys were Kidnapped!

Who could have predicted that this was going to be such a long painful vigil? The first two or three days I'd rush to the computer or smartphone to check up on updates to see if they'd been rescued already. Now...  I just can't imagine, I just don't want to imagine how the families of those three wonderful teenagers are holding up.

The Jerusalem Post keeps a live blog feed whatever with updates. 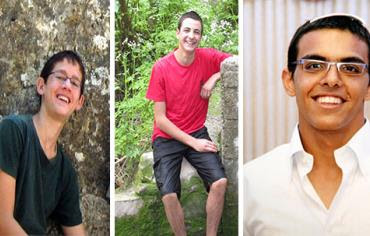 
Mahmoud Abbas has ceased his feigned concern and is now calling for unity elections with Hamas. We have no "peace partner," so let's finish fighting them all off. There never was any real difference between Fatah and Hamas.

Rescuing/supporting the American citizen among the kidnapped boys isn't really an American priority.

There are still lots of questions about what is happening.

My prayers are with the boys and their families and friends. It could happen to anybody...