The Judenrat's Alive and Well in Jerusalem, Unfortunately

Instead of doing the right thing and sending American Secretary of State John Kerry packing, because his "peace sic plan" propositions will only facilitate terror, death and the destruction of the State of Israel, G-d forbid, The Binyamin Netanyahu Government is continuing the "dialogue."


Replacing the 14 century old chaotic Middle East reality with his hopeful worldview, Kerry said: “Just think of how much more secure Israel would be if it were integrated into regional security architecture and surrounded by newfound partners….  I ask you to imagine what a two-state solution will mean for Israel, Palestine, Jordan, and the region. Imagine what it would mean for trade and for tourism, for developing technology and talent, and for future generations of Israeli and Palestinian children. Imagine Israel and its neighbors as an economic powerhouse in the region…. Think of the new markets that would open up and the bridges between people that peace would build. Think of the flood of foreign investment and business opportunities that would come to Israel, and how that will change the lives of everyday people throughout the region…. We need to believe that peace is possible…. Israel would also enjoy a normal, peaceful relationship the minute this agreement is signed with 22 Arab nations and 35 Muslim nations – 57 countries in all…. It is not beyond our imagination to envision that a new order could be established in the Middle East, in which countries like Jordan, Morocco, Egypt, Iraq, Saudi Arabia, and the GCC states, a newly independent Palestine, and an internationally recognized Jewish State of Israel join together to promote stability and peace…. “Read more at: http://www.jewishpress.com/indepth/opinions/assessing-secretary-kerrys-proposal/2014/01/05/0/

For our survival we must get real.  We just must say NO!  There is no other solution.


At a joint press conference with Prime Minister Benjamin Netanyahu upon his arrival, and prior to a private meeting later in the evening at which Defense Minister Moshe Ya'alon and Justice Minister Tzipi Livni were also present, Kerry conveyed his sympathy to the Sharon family and the people of Israel."We remember his [Sharon's] contributions, sacrifices he made to ensure the survival and the well-being of Israel," Kerry said, before launching into a mini-speech about the "framework" agreement he had brought with him.Kerry's message could not have been more sadly ironic, given the circumstances of his desperate shuttle diplomacy, aimed at getting Israel to make extensive territorial and security concessions on behalf of Palestinian statehood. It was Sharon, after all, whose understanding that it would be a cold day in hell before any genuine agreement could be reached with the Palestinians caused him to undertake a unilateral withdrawal from Gaza and northern Samaria. This disastrous move involved the evacuation of every last Jew from those areas. It was the response of the war-weary ex-general (with a late-in-life desire to be praised by the press after years of vilification) to the daily slaughter of Israeli civilians by Hamas, Islamic Jihad and other terrorists.This suicide-bombing rampage -- known by Arabs as the Aqsa Intifada and internationally as the Second Intifada -- was more aptly and accurately called the Oslo War. It was waged, after all, in response to the "peace process" of the same name.The result of Sharon's "disengagement" was a Hamas landslide victory in Gaza and years of missile barrages into Israeli cities.

And Arlene Kushner "wonders where we are going."


Palestinians celebrate at the welcome reception for released Palestinian prisoners, at the Muqata'a in Ramallah, in the early hours of Tuesday, December 31, 2013
But did Abbas express gratitude for this?  Of course not.  Silly question.  He declared that there would be no “peace deal” until every last vile, scummy, sub-human terrorist was released from our prisons.  He gained this much, why not shoot for the whole thing? Maybe Kerry would be able to get this for him.
~~~~~~~~~~
When Kerry arrived here a couple of days later (and more about this below), Netanyahu, in his opening statement, registered distress about the fact that Abbas celebrated the terrorist releases: “A few days ago in Ramallah, President Abbas embraced terrorists as heroes. To glorify the murders of innocent women and men as heroes is an outrage.”
http://www.jpost.com/Diplomacy-and-Politics/Netanyahu-to-Kerry-Doubts-rising-about-Palestinian-commitment-to-peace-336930Abbas did indeed refer to them directly as “heroes”: “Today is a day of joy to our people, our families and our hero prisoners who’ve achieved freedom...”
http://www.jewishpress.com/news/israel/abbas-released-palestinian-murderers-hero-prisoners-whove-achieved-freedom/2014/01/01/But I wanted to say, “Come on, Bibi!  You knew this is what Abbas would do when he demanded their release.  The problem lies in the fact that they were released.  If you didn’t want the celebration, you should not have let them go.”  The question to be asked is: “What sort of people demands the release of murderers in order to negotiate peace?”
They were let go as part of what is supposed to be a “confidence building measure,” which is pathetic.  They were released, as I have indicated previously, because of major pressure from the US, and for no other reason.

All I could think of this morning was Germany in the late 1930's and early 1940's when not only did the the world stand passively by as Nazi Germany systematically increased the discrimination, violence and resulting Holocaust of European Jewry, but the Jewish establishment in Germany, Europe and even other parts of the world were no better. 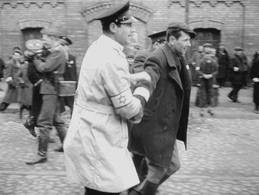 Remember that during the rise of the Nazis, Jewish leaders, religious and secular insisted that there was no real danger.  And remember the Nazis were even able to get establishment Jews, Jewish flunkies aka the Judenröte, Judenrat to cooperate with them and even make up execution/transfer lists. This is much too similar to our Israeli Government deciding which of us "settlers" will lose our homes. What our officials refuse to admit is that none of their acts, policies, negotiations or treaties will bring peace and security to the State of Israel.

And I don't take Intelligence Minister Yuval Steinitz's words seriously, because they remind me too much of what we kept hearing prior to Disengagement.


Israel rejects any US-proposed security concessions for the Jordan Valley, AFP reported Sunday, as US Secretary of State John Kerry visited the Middle East for the tenth time since last year.
"Security must remain in our hands. Anyone who proposes a solution in the Jordan Valley by deploying an international force, Palestinian police or technological means ... does not understand the Middle East," Intelligence Minister Yuval Steinitz told Israeli public radio.

Even I was fooled into thinking that it couldn't happen.  You won't fool me again.

And I don't think that making a joke out of Kerry is helpful or useful.

If we could post in large letters to every Jew on the planet the following message:

THE WORLD HATES THE JEWS AND WANTS EVERY LAST ONE OFF THE PLANET.

IN OTHER WORDS, THEY WANT US ALL DEAD ONE WAY OR ANOTHER - THE FINAL SOLUTION CAN BE VIOLENT OR "GENTLE."

THIS GOES FOR RELIGIOUS, SECULAR AND EVERY JEW IN BETWEEN, AND EVEN THOSE WHO DON'T CARE. EVEN THE PROMINENT ONES WHO BUY INTO THE NATIONS' ALTERNATIVE - THEY MUST GO TOO.

Would we ask ourselves, what's good about Judaism? If the whole world is against us, either we are as bad as they say, or else we are really, objectively the best in the world and they can't stand that, so to make themselves feel better they have to eliminate us, with (like by Judenrat) or without our cooperation.

We Jews need to wake up and smell the burning coffee whether we are b'chu"l or ba'aretz. Whether we understand it as treason by erev-rav-like Jews or new-age Jews or whatever, we know we're being sold out, each and every one of us. What those traitors don't realize or believe is that they too are included and may go first to be a good example for the rest of us.

For once in our history, can we be on HaShem's side and do it right?

To be fair to Bibi, I think he is juts being polite and stringing the Americans along so as not to upset other bilateral cooperation. He is relying on the Arabs to snooker the deal which they will inevitably do. Then he will be able to say "Look! I tried! But the Arabs screwed the deal."

PS The plural of Judenrat is Judenräte (with an a-Umlaut, not o-Umlaut)

"Judenröte" means "Jewish redness" or "Jewish blushing", which I suppose could have been your intention.

a, we're in serious trouble
aparatchik, Bibi is making a big, humongous mistake. I copy/pasted that spelling. I don't want the plural.