Will Israel Have the Guts? 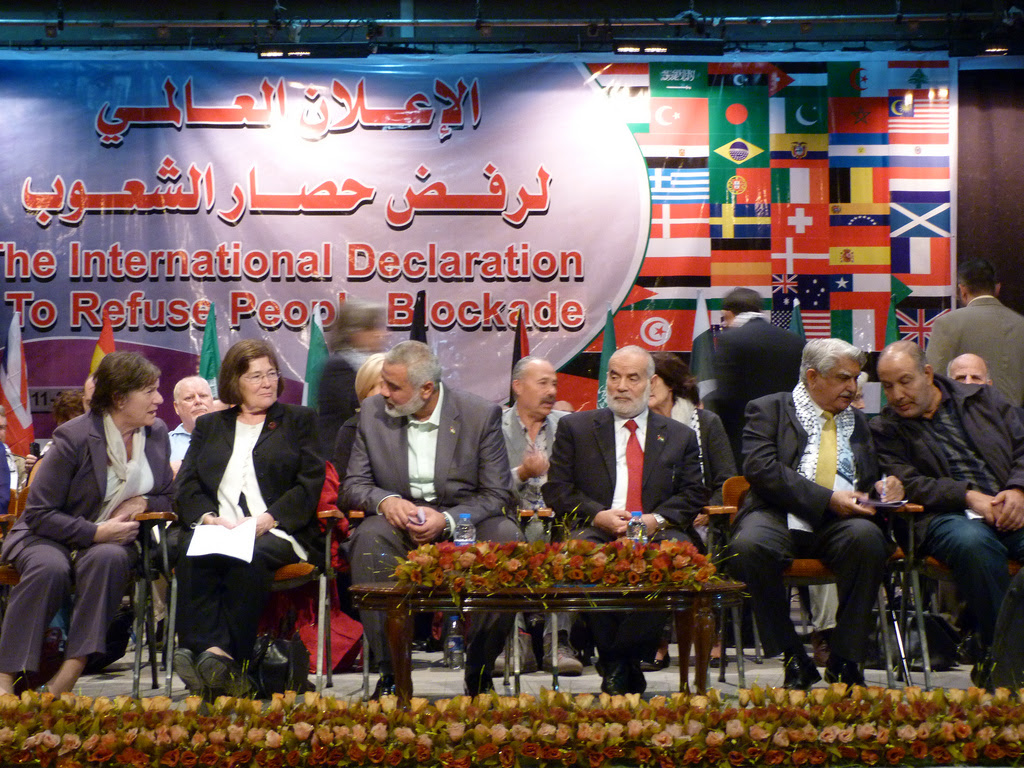 There's law and there's enforcing the law.  I wonder if the State of Israel will have the guts to really make all of these international anti-Israel agitators persona non grata.

"Citing emergency defense regulations, Israeli Defense Minister Moshe Ya’alon has outlawed The Council for European Palestinian Relations, a Belgian-registered non-profit organization that serves as terror group Hamas’s mouthpiece in Europe.
The move, enacted two weeks ago, but revealed by Israeli daily Ha’aretz on Tuesday, means that all of the executives and directors of CEPR, including four current European MPs and a former British cabinet member, could be arrested upon arrival in Israel."

Considering that the anti-Israel, anti-Jewish life in the Land of Israel demonstrations and destruction are direct results of the work of these organizations, they should have had been banned long ago.

And considering that the corruption and support of terrorism against Jews and Israelis in the PA-Palestinian Authority is a well-known fact, all governments and NGO's contributing to them are directly or indirectly supporting Arab terrorism. That even includes the United States.  A recent PMW post is of a letter by Congressman Gerlach to US Secretary of State Kerry.

"Dear Secretary [of State John] Kerry:"Recent news reports have indicated that the PA has provided monetary payments or salaries to individuals convicted of committing acts of terrorism, including those recently released as part of the ongoing Israeli-Palestinian peace talks. According to such reports (i.e., reports published by PMW, -Ed.), these salaries or stipends are provided by the PA to convicted terrorists... What is the U.S. Department of State doing specifically to immediately halt any U.S. taxpayer dollars going to the PA until this program is stopped?" U.S. foreign aid.... must not be used by the PA directly or indirectly to compensate convicted terrorists and/or their families... I look forward to your swift response... Jim Gerlach, Member of Congress, [Dec. 5, 2013]"

The United States can't be considered a truly objective, unbiased mediator between Israel and the Arabs. The American "suggestions," "starting points" are not in Israel's interests at all.  If that's where we are supposed to be starting, it's very clear that they want us wiped out and destroyed.  Nu, we all know what they'll say afterwards:

"Too bad it didn't work.  Let's just add another section to our Holocaust Museum."

And just like the Gush Katif style farming that was set up in Gaza, post Disengagement, the "State of Palestine" will soon wither away, eaten up by its corruption and incompetence.  All of its supporters will lose interest once there isn't a State of Israel.

So let's just prevent the debacle, inevitable tragedy, and stop the negotiations for a "two state solution" right now!

batya, i know its easy to say words, when we are not living there and seeing our homes being 'auctioned' off by gentile nations. no one has that right over the j people nor any other people except Hashem. i can see how the rest of the world is focussed only on the holy land.
inspite of all these, as usual israel shows its utmost strength in that it can never be cowed or destroyed and while other peoples may sink and sob with fright, the j people go on, with their discoveries, inventions and priceless technology that benefits not only themselves, but the rest of the world, most of whom (not all)are ungrateful because of simple envy and jealousy.

a rainbow appeared in israel a few days back. i have read during king hezekiah and the holy rashbi's time, there were no rainbows. worried for israel i wrote to my teacher on what this means for israel. this is the rebbe's explanaiton:

the difference between the gentile new year and the jewish new year resolutions.

As I told your husband, Israel needs to pick a hill to die on. We're waiting to find out when Jews will say they've finally had enough!

We know the Arabs have principles they don't relinquish. One gets the impression on the other hand, that the Jews in an inversion of the famous biblical story of Jacob and Esau - seem prepared to sell their birthright for a mess of porridge.

That point hasn't been reached yet. One day the Jewish people have a big decision to make. And in the end its not really about territory, its about their values and what Roger Cohen today called, "the bugbear that is the Jewish State."

With everything that's happened this week Batya, from the release of terrorists to last nights trial of Hamas's new rocket and now reading this blog, I just want to cry! :(

rainbow, I'm not worried about the goyim; I'm worried about the Jews. Our future depends on us and only on us. If we're strong and determined then G-d will support us and make miracles, like in 1967 and grudgingly in 1973. If we let the goyim rule, we'll again be destroyed and dispersed, G-d forbid.
Norman, we need to get strong, Jewishly strong!!!!
Esther, we can't give up.

batya, dont worry about the jews. in the prophets its written that in the foreign armies there will be jews and when they see the sufferings of their people they will turn and stand with their own. its very sad to see some jews behave like us gentiles, but this too is for the good. one day soon, they will shed off anything and everything that is un-jewish. even this prisoner release is happening with Hashem Watching. To turn this around , He will. how and when i dont know. but it will happen.

Only someone brain dead or obviously biased would disagree with the fact Obama hates Bibi.

Hatred comes from one of two places, the first can be if I wronged you maliciously, so a victim normally will hate an abuser.

But what if I never wronged you?!

The only other reason the emotion of hate exists is jealousy.

But why would Obama be jealous of Bibi?

In fact, why was there four thousand years of hatred toward Jews – perpetuated by the Arabs today?

The answer is quite simple – there are invariably only two types of people, those who love themselves and those who don’t.

Now can there be a worse feeling, a greater emotional pain than self-loathing (usually induced from evil parents etc.) And that’s the simple secret why in continuation of four thousand years of antismetism Obama hates Bibi.

rainbow, of course Obama is jealous of Bibi. Bibi is truly knowledgeable, unlike Obama. And contrary to what you've been taught I firmly believe that the Jewish People repentance and all are the keys to our salvation. That's the "light."
shy, I see true guts as needing backbone.