Every time we have Knesset Elections in Israel I blog and tell people that being in the coalition is not the way to have a true influence.  Prime Minister Binyamin Netanyahu proved me right again with his showdown at the "Volvo Corral" this week when he and Naftali Bennett locked horns.

Bibi runs a tight ship.  If anyone balks they walk the plank, and Bennett was told to jump.  In the end he didn't.  Bennett just apologized to his boss.


Officials close to Prime Minister Binyamin Netanyahu were satisfied on Wednesday evening that Netanyahu’s ultimatum to Economy Minister Naftali Bennett had worked.
The officials made clear that theletter dismissing Bennett was ready and would have been delivered on Sunday had Bennett not apologized for his remarks against Netanyahu.
Those same officials said that the ultimatum had worked “faster than they could have imagined”. Housing Minister Uri Ariel of Bennett’s Jewish Home party had reportedly mediated between the sides and led to Bennett’s apology.
Earlier, Bennett issued a public apology to Netanyahu over the personal criticism he had leveled at him over the idea that Jewish residents of Judea and Samaria would be allowed to live under Palestinian Authority (PA) control in a future agreement.
"In recent days there has been a lot of discussion about the idea of the PA retaining sovereignty over Jewish communities in Judea and Samaria, and certain people from the Prime Minister's Office (PMO) have tried to turn an existential conversation into personal attacks [on the PM] that were never there," Bennett stated to the press.
Bennett formally apologized to the Prime Minister, stating, "if the Prime Minister was hurt [by my remarks] - that was never my intention." 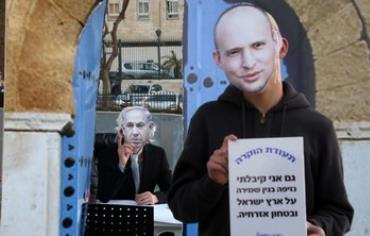 If principles were the point, then Bennett would have leapt gracefully and proudly into the opposition.

No Bennet fan here but it was a non-apology apology.

Anyway, funniest pic of the event:

Shy, Lapid's comments are really awful. He is what we/most of us thought.