Ellul the Month of Change, Transition and Teshuva, Repentance

It just hit me.  We're in the midst of the Jewish Month of Ellul, the month before Rosh Hashannah and Yom Kippur when we're supposed to prepare.  No, I'm not talking about cooking in advance, buying new clothes (drop in where I work) and other mundane things.  Ellul is about the spirit, our religious, moral, spiritual evolution, change, teshuva, repentance, getting closer to G-d.

I should have followed the bima ima's example. 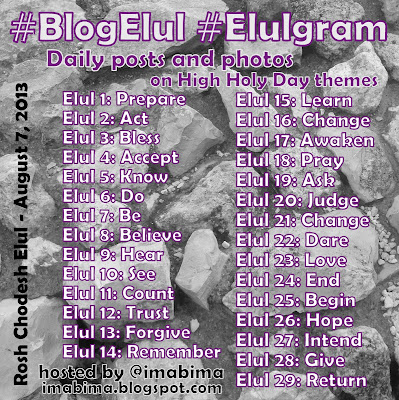 And I can't use that the excuse that I was busy or distracted by my son's wedding and prior to that my mother's death, because nobody has been busier than the Bima Ima and family with their concerns and care for Superman Sam.

Last night I admired the full moon and said to a friend.


"From the fullness of the moon, I can see that my son and his wife got married exactly two weeks ago."


Yes, they got married on Rosh Chodesh Ellul.  Some other family members who attended the wedding came up to them to inform them that they all share the same anniversary.  Apparently, it's a very popular wedding day.  That's where my mind has been.

And now we're less than two weeks to Rosh Hashannah the beginning of the Jewish Year, when we're supposed to work hard cleaning our souls from sin.  I'm going to quickly go through the first half of the Bima Ima's list, and bli neder* (not a vow) continue more later on, G-d willing.  I don't know if I'm doing this right, but I'll give my interpretation of what these actions mean in Ellul.  I can't do justice to these as separate blog posts, because we're more than halfway through Ellul.