A Mockery of Justice, Releasing Arab Terrorist Murderers and Those Who Attempted Murder

I'm a firm believer in capital punishment, the death penalty.  Unfortunately Israel has only practiced it once when it executed Eichmann.  According to Israeli law, the death penalty is only to be used against Nazis, and the law has never been amended to include Arab terrorists who are even more dangerous.

The media, both international and Israeli, keep referring to the convicted Arab terrorists being released to encourage sic the terrorist representatives to talk to us as just innocuous, benign-sounding "prisoners."  They could be white-collar clerks caught pilfering staples or shoplifters who took too much bubblegum for all the media tells us. 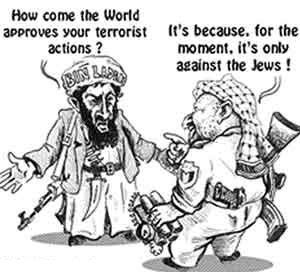 I'm not in favor of comparing this illogical, dangerous act, the release of terrorist murderers with Jonathan Pollard or Jews jailed in Israel.  That's why I haven't joined any of the campaigns to free Pollard from American jail or Jewish Israelis jailed for various security breaches.  None of them are terrorists so they shouldn't be considered in parallel/similar status.

Releasing convicted Arab terrorists, no matter what Israel would get "in return" is dangerous and demonstrates that the State of Israel does not value its citizens, security, justice or sovereignty.

The implied and easy to predict dangers make me wonder about the patriotism and morals of all of the politicians and government officials involved.  They are the same people who try to marginalize what they refer to as "the settlers," aka people like myself.  In the years leading up to the Nazi invasion of Europe and the Holocaust, people like Ze'ev Jabotinsky repeatedly warned European Jewry to leave and move to Israel.  Not only was he ignored and mocked in Europe, but the dominant Labor Zionists did their best to attack and marginalize him and his Revisionist followers.  In the end it was Jabotinsky whose analyses of the situation that was correct.

We're still fighting the same war, just a different battle.  G-d willing we will soon be victorious.
Posted by Batya at August 15, 2013

We need real Jewish leaders, not the people in the Knesset today. They are not real Jews but fallen, secular Jews.

Shira, yes, we need leaders. Not even the religious politicians have the guts and faith needed to lead.

Blessed shabbat to you and yours. i was wondering about not having the death penalty there. i am sure you know how this can be atrociously manipulated and innocents put away. perhaps this could be one reason.
have you also noticed batya, that even before these people were released, dozens of a more harmful calibre 'escaped' from afghan. everytime our side tries to harm you all one way or the other, even before it happens to you all, it happens to one or many of our nations.
my rabbi sent me this.
Who Does the Land of Israel Belong To? . . . huh?
An Israeli Sense of Humor at UN set the record straight.
An ingenious example of speech and politics occurred recently in the United Nation Assembly and made the world community smile.
A representative from Israel began:
'Before beginning my talk I want to tell you something about Moses: When he struck the rock and it brought forth water, he thought, 'What a good opportunity to have a bath!'
Moses removed his clothes, put them aside on the rock and entered the water. When he got out and wanted to dress, his clothes had vanished. A Palestinian had stolen them!
The Palestinian representative at the UN jumped up furiously and shouted, 'What are you talking about? The Palestinians weren't there then.'
The Israeli representative smiled and said . . ..
'And now that we have made that clear, I will begin my speech!'
smile and be happy, because you always have Hashem on your side. blessings.

prepare Hamonah gravediggers for doomed America and Europe [the U.S. military base there hasn't gun UNnoticed]. there are consequences for Navy exercises with Gog and Magog into the new year. such flaunting of infidelity is provoking anger. do not be insulted when Egyptian~America and European~Esav are buried under sand.