There's a real dangerous emergency situation going on in Egypt.  It started with the "Arab Spring" there not long ago which was celebrated by United States President Obama and other Leftist peace groupies. 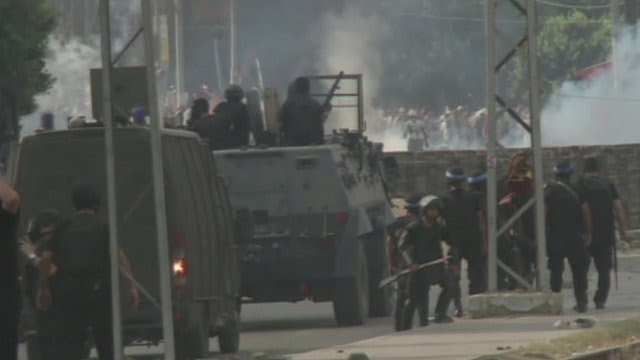 At least 15 people are reported to have been killed as Egyptian security forces moved in to clear two protest camps occupied by supporters of deposed president Mohammed Morsi in Cairo.
But the Muslim Brotherhood, which backs the protests, put the number of casualties much higher.
Bursts of gunfire were heard and armoured bulldozers moved in. Security forces fired tear gas. BBC

Poets love to describe "spring" as the sweet smell of flowers and freshly cut grass in the spring, but this spring smells more like the sickly stink of a lot of broken bottles of cheap perfume in a closed space. There has been a lot of blood spilled, too.

Looking back at Obama's speech:


The comments came in Obama's most comprehensive response to date to the uprisings sweeping the Arab world. Speaking at the State Department, he called for the first time for the leader of Syria to embrace democracy or move aside, though without specifically demanding his ouster.
As he addressed audiences abroad and at home, Obama sought to leave no doubt that the U.S. stands behind the protesters who have swelled from nation to nation across the Middle East and North Africa, while also trying to convince American viewers that U.S. involvement in unstable countries halfway around the world is in their interest, too.
Obama said the United States has a historic opportunity and the responsibility to support the rights of people clamoring for freedoms, and he called for "a new chapter in American diplomacy."
"We know that our own future is bound to this region by the forces of economics and security; history and faith," the president said.
He hailed the killing of al-Qaida terrorist leader Osama bin Laden and declared that bin Laden's vision of destruction was fading even before U.S. forces shot him dead.
Obama said the "shouts of human dignity are being heard across the region."
The president noted that two leaders had stepped down - referring to Egypt and Tunisia - and said that "more may follow." He quoted civilian protesters who have pushed for change in Egypt, Libya, Syria and Yemen but noted that among those nations, only Egypt has seen the departure of a long-ruling autocratic leader.

If Israel has any questions, as it should, about American expertise in understanding the Arab mentality and culture of "democracy," it should just consult with Egypt's Morsi.

As of just a few extremely short years ago, Egypt was a bastion of stability in the Arab world.  That's  why many Israeli politicians of the Right and Left agreed that PM Menachem Begin had done the right thing to give the Sinai to Egypt.  I davka disagree with them, as does Caroline Glick.

As the intervening 32 years since the treaty was signed have shown, in essence, the deal was nothing more than a ceasefire. Israel surrendered the entire Sinai Peninsula to Egypt and in exchange, Egypt has not staged a military attack against Israel from its territory.
The peace treaty's critics maintain that the price Israel paid was too high and so the treaty was unjustified. They also argue that Israel set a horrible precedent for future negotiations with its neighbors by ceding the entire Sinai in exchange for the treaty. Moreover, they note that Palestinian autonomy agreement in the treaty was a terrible deal. And it set the framework for the disastrous Oslo peace process with the PLO 15 years later.
For their part, supporters of the treaty claim that the precedent it set was terrific for Israel. The treaty cites the borders of the Palestine Mandate as Israel's legal borders. And since the Mandate envisioned a Jewish state on both banks of the Jordan River, at a minimum the peace treaty sets a precedent for a future annexation of the west bank of the Jordan. -Caroline Glick

But with the explosive situation in Egypt, things can get much worse once a ruler decides to distract the people from their own problems.

Considering that the American brokered "peace sic plan" hinges on the reliability and stability of an Arab terror state that doesn't exist, and the precedent of a treaty that is on the verge of collapse, I think we should cut our losses and get on with building our country, the State of Israel.
Posted by Batya at August 14, 2013

I don't really have a good comment to make, but my heart just wants to say thank you for sticking with this blog, thank you for saying things like this -- it's not that common to speak against this diplomatic approach, so when I hear it, it encourages me -- not deceiving myself it will bear national results, but that it's the right thing to do regardless of outcome, & that it may bear individual results here & there, and I believe heaven takes notice of such talk, noting the faithful (see Malachi 3:16 -- & that's just 1 place, but I'm Christian & won't preach, but that's your prophet so I think it's ok to say that). Thanks. - ER

ER, thanks for the encouraging words. Every once and a while I think I ought to throw in the keyboard and give up.

I've been studying the Bible and Prophets and understand that we've been through all this before and will eventually learn how to behave and follow G-d.