I'm not surprised, not one iota. 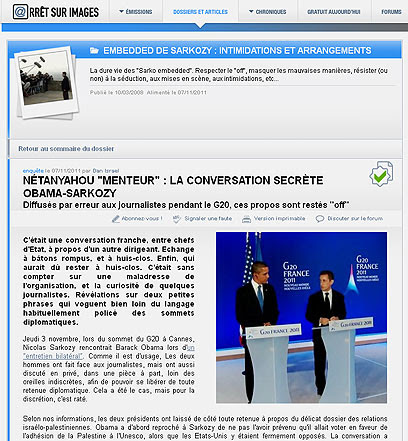 
The conversation then drifted to Netanyahu, at which time Sarkozy declared: "I cannot stand him. He is a liar." According to the report, Obama replied: "You're fed up with him, but I have to deal with him every day!"

Too many Israelis and Jews, worldwide, like to think that well-written speeches and well-practiced smiles mean that we have friends and allies in high places like Washington DC and Paris.  They ignore the fact that speeches are meaningless words meant to convince and placate, and the politicians and diplomats must rehearse to sound totally sincere.

Very rarely do we see the real person behind the public official.

Most Americans were horrified to discover that Nixon's "private" language use was so full of obsenities when the secret tapes were publicized.

My wife says the same things, but shell counter" WE are allowed to"

The rational and realistic part of me isn't surprised in the least.

The emotional part asks why, since virtually every Israel I've met online (olim or sabra) have been so kind to me.

I may say I don't like the President, but that doesn't mean I don't like the country. Even if Obama doesn't like Netanyahu so much (after all, Obama is left leaning and Netanyahu is right leaning), it doesn't necessarily say anything about how Obama feels about the State of Israel itself.

Daniel, in the family...
Keli, you're not Obama

Susan B, as I was writing it, I thought of that point. It's a good one if the speakers hadn't been world leaders. For them to personalize their negative feelings about a democratically elected leader of a different country, my country, makes me doubt their sympathy or objectivity concerning Israel.

You should know that the Nixon video is followed by a link to a topless protest.

goyish, I didn't see such a thing on the same video