Israel's strong response against invading Arabs from Syria was bupkes compared to the violence between Syrian authorities and the protesters. 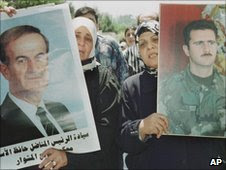 Israel may have killed about a dozen of rioting invaders, maybe 10% of the number that the Syrians killed.  What surprises me is that there are international protests against what Syria has done.  Generally the Arabs can get away with all sorts of violence. Bashar al-Assad's Teflon must have had worn away.

I have no doubt that the firmer Israel is against violent rioters and invaders, plus we must never apologize, the less the world will criticize us.

There isn't a country anyplace in the world that allows anyone to force their way in at borders without proper visas and procedures.  Every other country shoots those threatening violence.
Posted by Batya at 6:32:00 AM