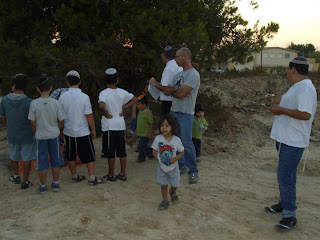 
I think there were more small children there than anyone else. No matter where I walked they kept running against me, dodging me, bumping into me. A lot of children and a few cute little puppies. Both dashed everywhere, howled, and begged to be picked up. Sadly, they made it difficult to hear the speakers at the synagogue cornerstone ceremony Wednesday, 22 June 2011. Nevertheless, they added a lot of life and gaiety to what otherwise would have been a sentimental and strongly emotional event.

It all started off on a symbolic note when Rabbi Avraham Uchayon placed a fragment of stone from the Neve Dekalim, Gush Katif, synagogue complex into the cornerstone pit. It seemed to me rather like planting a stone seed – water it and it’ll grow and blossom and flourish into a stone building, our new synagogue. But stones don’t grow with water, nor do buildings spring as quickly as plants. Yet the Rabbi gave a touching speech as he stood over the cornerstone. He bid us remember that this synagogue is temporary, because we will yet return to Gush Katif. We wanted to hear that. We needed to hear that. And so we cheered…

However, until that happens, we can be pleased by knowing that the architect of our new synagogue, Prof. David Cassuto, is a very special and talented person and we are allowing him to close a unique personal circle. In his speech, Cassuto told us that his first job upon receiving his degree from the Technion was to design the synagogue for the Nitzanim youth village. Fifty years later, he would be there (here) once again, designing four synagogues for the Gush Katif expellees.

Standing on the stage during the cornerstone ceremony he told us how the army had sent him to photograph the Gush Katif synagogues before their IDF destruction. So he went and saw them. And then he visited with the Pope's representative in Jerusalem and asked how he can stand by and watch holy sites be destroyed. The representative contacted the Pope, who told former PM Ariel Sharon not to destroy the synagogues. Holocaust survivor Cassuto viewed this as a victory – that Jews wouldn't destroy synagogues.

In such an event like a cornerstone celebration it is the small things that matter. The fact that MKs weren't there even though they were invited was shameful, but at least we were there for each other. I saw one middle-aged man put an arm around a friend that he hadn’t seen for a while, dispersed to another Gush Katif community, and walk with him to the corner stone. How often do they speak to each other? Do they manage to call or visit? Or do they, like me, wait for these events to renew acquaintances with former Gush Katif friends? An elderly neighbor of mine with red-dyed hair wandered over greeting people in a friendly but flustered way. Her friend motioned her over and beckoned her to sit beside her. These are the gestures of a community – taking care of each other. Helping one another without strings attached. In short, people who are friendly with other people purely for friendships sake. 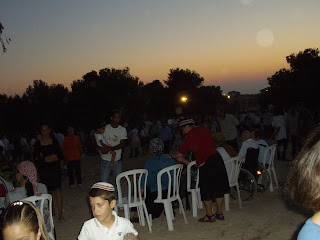 Though the band played well, it took a while for dancing to start. In the end, it wasn't until they started an Irish tune that a ring formed; a father started dancing with his children and others joined in. When the chief Rabbi of Hof Aza saw this, he hurried over to join with his usual beaming smile. As I left, I heard the kindergarten children's performance, singing into the microphone. The last act was to be a flag dance.

Though fashioned by a wonderful architect there is still something I'd like to see accomplished: the ark pillars from the Neve Dekalim Ashkenazi synagogue, which were sawn in two in order to fit the pre-fab Caravilla synagogue, need to be made whole once more. Can that be done? I hope so.

But we all have our dreams. We dream to return to Gush Katif. Prof. Cassuto told us that it was his dream to be the architect for the Temple, yet Rav Ovadia Yosef told him that the Temple will descend built from Heaven, but that he shouldn't grieve; every building settles down after a year and needs to be touched-up, and who better than him to 'touch up' the Temple?

A touching report, Shifra. Thank you for keeping this alive for those who were not there. I was especially interested in reading about Prof. Cassuto.

Your yearning for home expressed in this article is a yearning that is representative of all who lived in Gush Katif.It expresses the faith that Gaza,part of the inheritance of Judah has the potential of again being a home for the people of israel as it was over the generations.
Looking forward to reading your post of the dedication of the synagogues in Nitzan and G-d willing in Gaza as well .

Shifra, thanks so much for reporting this on the blog.

I write with tears in my eyes from the sunny shores of Australia.
I had the honour of connecting and joining two wonderful families from Elei Sinai after the Gerush who came to Australia to chill out and organize the future of their community.
One family in particular broke my heart as they were expelled twice, once from Yamit and then from Elei Sinai. Her father was instrumental in the building of Yamit and Neve Dekalim. He is now a resident of Nitzan. My friends will be back in Eretz Yisrael shortly to start rebuilding their lives.
I cannot express my deep gratitude to HaShem for having introduced me to these stirling families and many other residents from Elei Sinai who also came to visit them in Australia.I came to know intimately their struggles, the hopes and their desires.
After the Gerush, the families oF Elei Sinai became the conscience of Israel in that they lived in a tent city at Yad Mordechai Junction from just under a year.

Judaism teaches that the initial thought or spark is masculine whilst the process of bringing that thought or spark into reality is feminine.
As an architect I can vouch for that. We all dream of being involved in the re-building of the Beit ha Mikdash. Somehow, just maybe... we just need that spark, that thought in our hearts and minds and HaShem through the Sh'kinah will make it a reality.
Similarly we must have that spark for Gush Katif.
http://www.youtube.com/watch?v=goxmGtfV9sI&feature=related

Todah rabbah again, Shifra and I look forward to reading "Grains of Sand." Keep up the voice of purity and hope.

As Shifra's publicist, I would like to thank you for your encouraging and supportive words as well as interest in "Grains Of Sand." And if you like this article, please visit her website where more of her works can be read: http://grainsofsand.insightonthenews.net/