New York has been commemorating five years since the massive terror attack on 9-11. Yes, it's very understandable. The trauma can never be forgotten. I know, since I had my own brush with terror, Arab terror, in Jerusalem, ten and a half years ago.

Unfortunately, for many people Jerusalem is so associated with terror attacks that they are afraid to visit. That was one of the ironies during our recent war with Hezbollah, when Jerusalem was considered one of the safest parts of the country, along with Judea and Samaria. Many Israelis from the north of the country have avoided going to Jerusalem for years, out of fear. I remember when my daughter was doing Sherut Le'umi, National Service, in Kiryat Shmoneh, 1989-91, the teachers in the school demanded that they cancel a trip to the capital. They were afraid of terrorist attacks in Jerusalem. And over the years, things only got worse.

Actually, there were so many terror attacks just days before I was injured, that the police were ordered to try to prove that the Arab could have rammed into the dozens of us by accident.

So, when I saw this headline: Terrorism’s Grand Tour in the New York Times, I was sure that Jerusalem was included. How dumb can I be? Why should the NYT encourage its readers to think of us as victims? It goes against policy.

Therefore I included a couple of pictures. They're worth "a thousand words," nu? 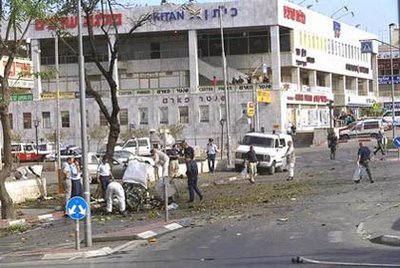 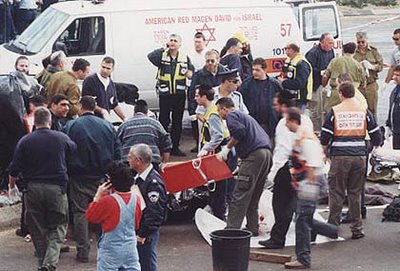