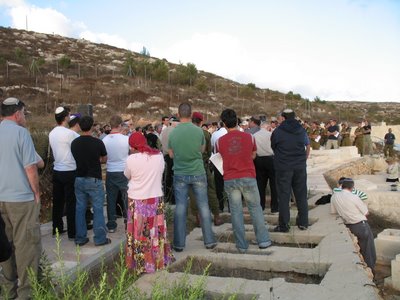 Yesterday I went to our local cemetery for Avihu Keinan's Azkara, Memorial Ceremony. Three years after his death in a badly planned army action, and the cemetery was packed.

Avihu was killed by terrorists in Gaza, because the army, in their miss-guided, perversely "moral" thinking decided that it was safer for possibly "innocent Arab civilians," if our soldiers would carefully go through a building, known to harbor terrorists, rather than just blowing it up. In simple words, Avihu was "set up" by our own army. The terrorists had no problems killing him, and he didn't have a chance to defend himself.

In anger and in pain, his father, Moshe, declared that he would march to Jerusalem and spend the Succot Holiday in a protest succah at the President's Residence. And that's what he did. It is now a Shiloh tradition to march to Jerusalem during Succot. The picture in the banner of the flags at Sha'ar Shechem is from the second march. Everyone's invited to join us for all or part of the march, which will end at the kotel. For more information call Orit 0545-649-140. 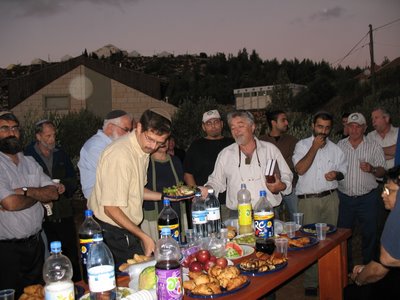 From the cemetery we went to the Dedication of a new park, next to the Keinan home, Gan Avihu. The beautiful and well-constructed table and swing were made and designed by a friend of his. Moshe gave a short shiur, Torah lesson, and we ate and watched the sunset over the Tel of Ancient Shiloh.

The picture below is from the third Od Avihu Chai march to Jerusalem. That's Moshe with his grandsons. 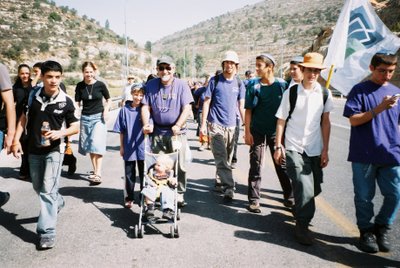 The wonderful Shiloh tradition of marching to Jerusalem during Sukot is fine, but as a protest it of course failed. It was just the same sort of thing that failed to stop the expulsion from Gush Katif. This Sukot when you march, think about what we can do differently to make the country aware and stop the same wheels from turning as they have turned from the day that Moshe Dayan handed over the keys to Har Ha-Bayit (Temple mount) to the Muslim Wakf.

Kol Hakavod to Batya and the rest of the Shilo residents for highlighting the immoral "tohar haneshek" policy of the IDF which values arabs over our precious boys in uniform. This message has been lost in the recent demonstrations against the Olmert govt. calling for governmental inquiry into the mismanagement of the Lebanon war. Not only have our boys become fodder going "door to door" in enemy occupied terroritory,but we failed to stop rocket fire from Lebanon and Gaza.

Thanks
You're both right, but we still must do something.
The march will be Thursday, the 5th day of Chol Hamoed.
Goyish, why don't you and you family join us. Organize a delegation from Kochav Hashachar! We can brainstorm as we march!