about my trip to Kever Rachel... don't ask! 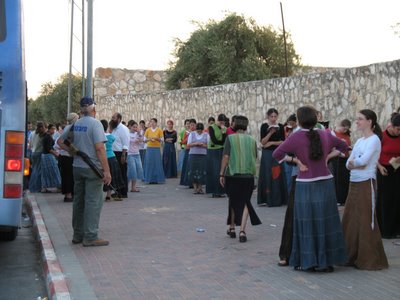 If you saw this, then you can guess where we ended up. Yes, we ended up at the kotel, and I was very wrong. It was crowded, as you can see in that picture. The ones below are close-ups.

So, let's start at the very beginning, A very good place to start...

The women of Shiloh and nearby yishuvim (communities) go to Kever Rachel (Rachel's Tomb) every month before the start of the Jewish, lunar month. So, this month, because of all the Rosh Hashannah preparations and Avihu Keinan's Memorial events, we scheduled it a couple of days early.

Some months I can't make it because of work and babysitting for my granddaughters, but this time everything fell into place. It was my short day at work, and I planned on taking the junior high bus to Ofra to meet the bus from Shiloh to Kever Rachel. I'd even have time to rest in my daughter's house. Then...

It seemed a bit too quiet at work. The junior high was on a school trip, and there wouldn't be the ride to Ofra that I was counting on. OK, I refused to allow myself to get hysterical. I had plenty of time. Another teacher offered to take me, but later. OK, still enough time and an option to wait at the "T" Junction, which I ended up doing. Thank G-d for cell phones.

The bus was very crowded, more crowed than ever before, which meant that expenses were covered. There were a lot of young mothers with children, besides the more middle-aged regulars. That was good.

When we got to the "Ma'avar Michmas," Kochav Yaakov junction, we turned into the gas station parking lot, and I discovered that we were changing buses, since ours wasn't working well, as if the new one was. Have you ever heard of passive solar heating? That was it! The bus was a sauna, and the air-conditioner wasn't any stronger than a weak fan. But we're tough! We're pioneers, and we kept on going to Kever Rachel.

Then we arrived at the "border" and discovered that there were many buses ahead, waiting. No one was being let in. "They," the "authorities" had decided to do some repairs and ripped up the streets. The girls in the picture above were also waiting.

Not being carefree high school girls we quickly came up with an alternative plan and got approval from the organizers and bus company. We would go to the kotel. There was no way that we would go home without something "special."

One neighbor told us that it seemed strange that it was closed since her husband had gone with the junior high that morning. When she phoned him later, he reported that yes, they had gotten in fine, but suddenly when they were supposed to leave, they weren't let out because of the road repairs, and they were "imprisoned" several hours, with those junior high boys! There had been no notices of closure in advance. The school had all the necessary permits!

I should have kept my mouth shut. Immediately we were stuck in a traffic jam. So we didn't waste any time at the kotel and we were too late for me to take pictures of the sunset. I had also predicted that the kotel would be empty-- wrong again! It was comfortably crowded, and for the first time in a long time, I dovened in the little room on the side (next picture,) where I had gone frequently as a student. 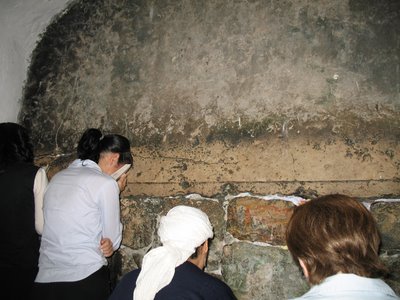 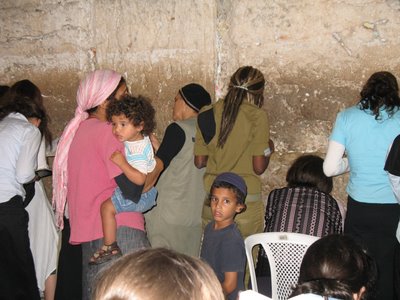 And, as my wife was peeved about the situation, she called me and asked that I try to contact the media to alert them. which i did but I am not aware that this made it into print.