It's a matter of priorities 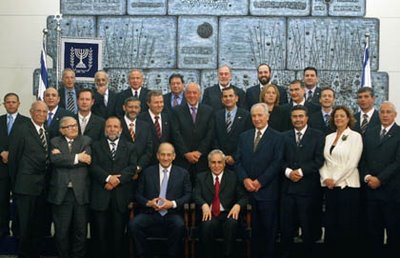 In a very modern interpretation of

the Israeli Cabinet will probably pass the budget, even though it contradicts most, if not all, of the coalition agreement and the parties' economic and social platforms.

Here are a few excerpts from the Basic Guidelines of the 31st Government of Israel, 4 May 2006, translated from Hebrew:
4. The Government will act to narrow social gaps and will formulate a detailed plan to battle against social distress and will work to improve the public health system in general and amend the components of the health basket in particular. Foundations will be laid to provide equal opportunities for all its citizens, regardless of differences in race, religion or sex.

5. The Government will fight corruption and immorality in all areas of life, and, first and foremost, in government institutions and the public administration.

7. The Government will fight crime and violence and will do its utmost to protect the personal security of Israel’s residents.

10. Israel will continue to act determinedly in order to guarantee the security of its citizens and residents in and outside of Israel, against terror organizations threatening to harm them.

11. Israel will continue to act, anywhere and anytime, in order to foil, disrupt and prevent terror attacks against its citizens or residents.

13. The Government considers the build-up of its military and security force and the preservation of Israel’s deterrence capabilities against all enemies to be an essential component, without which the country’s integrity, the safety of its citizens and economic prosperity cannot be preserved.

24. During its tenure, the Government will determine a target to be reached gradually, to raise and fix the minimum wage to NIS 4,600 ($1,000). To this end, and following an agreement between the coordinating bureau of the financial organizations and the New General Labor Union, the minimum wage will be raised in the first stage by an overall rate of NIS 500, in two phases: first – by half the amount during the present budgetary year, no later than June 1, 2006; and second – by half the amount during 2007 (totaling NIS 125 on April 1, 2007 and NIS 125 on June 1, 2007).

26. The Government will act immediately to build a system of efficient and appropriate enforcement of labor laws, including the minimum wage law, in a manner that will ensure compliance with the terms of labor laws in every field of the economy.

34. The Government will act to advance the rights of the aged and pensioners.

39. ...
The Government will ensure accessibility to higher education, in a way that assures equal opportunities in education. This equality will be ensured, inter alia, by determining appropriate tuition, providing a subsidized loan system for students who are unable to fund their studies, integrating students into national projects to reduce illiteracy and social gaps. The Government will further implement a funding plan for higher education, in the spirit of the model which was successfully implemented in Australia.


My gut feeling is that the cabinet members will do everything they can to stay in business. New elections are the last things they want, since many have no chance of being re-elected. And if elections are held soon, Olmert's chances of forming the next government are anorexic at best. If they reject the budget proposal, it will be a green light to vote against it for those wavering Knesset Members, who aren't in the cabinet.

I included the pictures, so you can visualize the people who are making such fateful decisions for the State of Israel.

And if you haven't yet heard, new corruption charges are being made against Olmert.

picture and cabinet list credit
Posted by Batya at September 12, 2006