I just wish the world would stop focusing on "making Peace" between Israel and its sworn vicious enemies. Such a "deal" can only be deadly. Everybody willing to open their eyes and see what's going on and what has been forever can easily see that the Arab/Muslim culture is violent. It doesn't matter if it's in Libya, France, Syria or Israel.

Our enemies have adopted terrorism as their means of acting against us, and it isn't something new. It didn't begin with the 1967 Six Days War or the 1948 Israeli War for Independence. There was Arab terrorism long before Europe's nationalism evolved into the countries people today take for granted, like France, Germany and Spain.

In the more recent prestate time, first the Turks ruled totalitarian style and then the British were mandated by the League of Nations to prepare the Land, which was labeled on some maps Palestine, as a state for Jews. The British didn't like the idea and gave more than 50% of it to the Hashemite Tribe which they moved to the area east of the Jordan River. And that was the invention of the Hashemite Kingdom of Jordan, a country of nomads who had no common history ruled by a tribe that had no connection to them.

At the same time, Jewish Zionist began moving to the Holy Land and for the first time farming and started businesses. Those economic opportunities attracted more and more Arabs, mostly from the north, what is today called Syria and Lebanon.

Europe and Britain, instead of encouraging the Zionist enterprises and telling the Arabs how lucky they were, sabotaged the nascent Jewish state. It wasn't enough for them that Britain had invented Jordan, they decided to invent another Arab country which would be called Palestine. The United Nations, which succeeded the League of Nations as an international body, proposed and division of the remaining Mandate between the Jews and what they called "Palestinians." In order to make it easier for this additional new Arab state to survive, they gave it most of the land. There was no logical way the Jewish State could survive, but they left out one fact.  Gd wanted a Jewish State. After two thousand years of punishing exile, it was time for the State of Israel. Finally the Jewish People were ready to return.

The State of Israel is about to celebrate seventy 70 years of independence and the world isn't happy. it accepts and encourages Arab terrorism by blaming us for the violence. It has been "mentoring" the Arabs into making a new country, but it's not going to happen.

This Land is our Land and nobody else's! 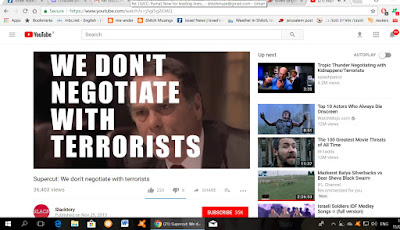 Before attempting to make peace between
Israel and its sworn enemies, it is
logical to understand the true reasons
for the lack of peace, which are NOT
mentioned by the pro-Muslim news media:

Before attempting to make peace
between Israel and its sworn enemies,
it is logical to understand why
Israel's 1967 borders are undefendable:

Did Captain Kirk negotiate with terrorists?

Find the answer by reading this very short blog article:

Mr. Cohen, blogger seems to think you spam. I keep having to rescue your comments from the spam folder.