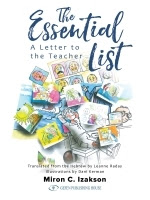 The Essential List - A Letter to the Teacher by Miron C. Izakson, Gefen Publishing House, is a fictional diary. It was originally published in Hebrew and translated very effectively by Leanne Raday. This fictional diary of just twenty-five 25 entries is supposedly written by a lonely and precocious twelve year old boy as a school assignment.


Sixth-grader Avi has an assignment: write a letter to the teacher like the interesting letters of “days gone by.” Taking the missive as a starting point, the bright and inquisitive youngster delves into his own psyche and tackles philosophical issues such as the search for identity, family relationships, the meaning of time, the role numbers play in the world, and more...

I don't know about you, but when I think of a diary written by a precocious preteen or teenager, I think of Anna Frank. The nameless boy, davka, doesn't mention the famous and iconic Holocaust victim, Anna Frank as the impetus for the school assignment. Actually, unless I missed something, there's nothing Jewish about Izakson's book. I don't think he mentions Israel either. Does he think that makes his book more universal? For me it doesn't.

The narrator seems dangerously isolated, and that may be because neither religion nor nationality is part of his identity. He's a very lonely only child, who doesn't seem to have many friends. The only one mentioned is Nili, whose father seems to be more interested in him than his own parents are.

The Essential List is a short and easy read. I read most of it when I was home sick with the flu. For me it helped that there weren't many characters to keep track of nor plot lines to remember. Sometimes short books like this one are the perfect medicine. I'm going to try to talk my book club  into reading it, because as short and simple as it is, it can be the springboard for some good discussions. And after that, I'll pass it on to my grandchildren to read for school book reports. It would be interesting to know what real children think of it.