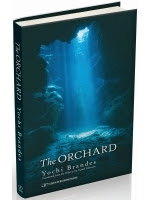 When I was offered a review copy of the English translation of Yochi Brandes's The Orchard, which is her fictionalized version of the life and contributions to Judaism of the revered Rabbi Akiva, I wasn't sure if I should accept it.

From what I could gather, Brandes's approach to Judaism isn't what I call "mainstream," aka Orthodox. Her degree is from Machon Schechter, which is the Israeli academic institute of Conservative Judaism in Jerusalem. Her teaching of Bible and Judaism has been in Conservative and Reform schools and institutes. It's also important to note that the book is marketed as fiction, not history nor theology. That's why I decided to read The Orchard. It provides a "maybe this is what happened."

I'm not at all an expert in that period of time, the Sanhedrin and Rabbi Akiva. But since I've annoyed my neighbors over the years, when we learn about Lag B'Omer, the Period of Sefira and the Plague which killed thousands of Rabbi Akiva's students, because of my unconventional opinions, I hoped that Brandes's book would cast light. Ironically, that very famous story about Rabbi Akiva doesn't make it into Brandes's novel. Nor does the story of Rachel's coming to visit her husband and then turning back after seeing how joyfully he learned and taught.

Instead we see the very human side of the sages of the time and the political and personal intrigues. How much is true or fantasy? We will never know. I've been studying Bible for years, and I'm used to the idea that Judaism and the Jewish People were founded by humans with frailties. I don't feel threatened by the possibility, not at all.

The Orchard is written in first person as if Akiva's wife Rachel is speaking. This makes sense, since even the most conventional and fawning stories of Rabbi Akiva show her as the main character, the power behind the scene. Before I go any further, I must say that the translation by Daniel Libenson is fantastic. I have no idea how the book flows in Hebrew, but I was very impressed by Libenson's writing.

I definitely enjoyed reading The Orchard and recommend it. It's a fictionalized account of the times of Rabbi Akiva and Bar Kochba after Jerusalem was conquered by the Romans. My guess is that it's probably more realistic than the saccharine fairytale stories many other publishers offer. That's my opinion. You may agree or disagree. I suggest reading The Orchard before voicing yours.

Batya Medad, my dear Jewish sister,
my dear friend, with all due respect,
you made a big mistake by publicizing this book.

One problem is that the non-Orthodox
DO NOT HAVE the knowledge
to write a good book about Rabbi Akiva,
or any great Rabbi.

Another problem is that the non-Orthodox movements:
do not believe in the Divinely-revealed nature
of the Torah or Tanach, and do not believe that
the great Rabbis of the Talmud were any better
than the famous philosophers of Europe.

Yet another problem is that books by non-Orthodox
consistently present the great Rabbis and prophets
in ways that are Chillul HaShem.

Certainly, you must be aware that the non-Orthodox
movements are very strongly in favor of homosexual
“marriage” and homosexual “Rabbis”. It is very
likely that the author of “The Orchard” shares
those wicked disgusting heretical opinions.

If any Jew denies that even ONE WORD of the Torah
is Divinely-revealed, then he is a heretic [apikuris].

In paragraph 6 of this chapter, Rambam teaches that
a heretic [apikuris] has no place in the afterlife
of the righteous, and will be punished eternally.

Around 930 years before Rambam was born,
the Mishnah, tractate Sanhedrin, chapter 10,
paragraph 1, taught that Jews who deny the
Divine-origin of the Torah have no place
in the afterlife of the righteous.

I feel offended that you are more interested
in publicizing a book written by an ignorant
apikuris than you are in publicizing
my messages on your own blog.

Much more importantly, the writings of:
Rabbi Avigdor Miller, Rabbi Aryeh Kaplan,
Rabbi Lazer Brody, and Rabbi Zelig Pliskin
are infinitely more worthy of being publicized
on this blog than books by apikirus
“Rabbis” who endorse homosexual “marriage”
and reject the Divinely-revealed nature
of the Torah and Tanach.

You should delete all mention of books like
“The Orchard”, and replace it with publicity
for the books of: Rabbi Avigdor Miller,
Rabbi Aryeh Kaplan, Rabbi Zelig Pliskin and
Rabbi Lazer Brody – then maybe G_d will
forgive you for this terrible error-of-judgment.

Last but not least, “The Orchard” should
be thrown in the garbage, along with all
book written by the non-Orthodox "Rabbis"
who teachings are a super-massive FRAUD.

No reason to blacklist the book. Read it.

I must commend Mr. Cohen and give him a big yasher koach for his beautiful and correct comment!
Would like to add that why would any 'fictional' book mean anything other than just another interesting story which has no meaning whatsoeve?
Anyone who disparages any of our holy ancestors, leaders and, of course, holy writings in any way is in no way worthy of being lauded and publicized.

Nobody is perfect, and to claim that they are or were is not what Gd wants. We are all in need of improvement. Did you read my review or the book?