Finally the United States has a president who isn't totally enamored with Arab terrorist leaders. I can't remember a time when an American President seemed more comfortable and supporting of Israel rather than the Arabs who want to destroy us.

As imperfect/flawed as Donald Trump certainly is, at least he and his family aren't as entwined, financially, emotionally, politically, ideologically, religiously with the Arab terrorists and their backers as his predecessors were.

Obama, early on in his presidency pledged to help facilitate the establishment of a Palestinian State, and his failure (thank the Good Lord) to do so made him bitterly and unabashedly anti-Israel at the end of his rule.  Yes, he took off the diplomatic "mask."

Trump, in his ignorance and naivete had announced that his brilliant Jewish son-in-law could pull off a "peace deal" with Israel and the Arabs, but it seems that after visiting here, he is starting to realize that it won't work. In the world of real estate, some projects get scrapped before making it past the early blueprint stage. I have no doubt that Trump's plan for "peace" here will be shelved pretty soon. His administration and especially Jared Kushner have too many more pressing issues to deal with, to put it mildly.

Many people keep asking me what I think of Trump and his presidency. All I can say is that I'm not afraid of the anarchy that seems to be the nicest word to describe what is going on in his administration. With all his faults, thank Gd, he isn't Hillary Clinton. I have no doubt that she would have been worse than Barack Hussein Obama, especially when it comes to Israel. And I wouldn't be surprised if the rather anemic Democratic Party does draft/pressure Michelle Obama to run in either 2020 or 2024. The only reason that she may refuse is if she really finds herself enjoying their well-paid celebrity life too much.

To make it clear, I want to repeat what I've written many times. The security and continued existence of the State of Israel is up to us, not any foreign country or international organization. We in the State of  Israel and the Jewish People all over the world have a strong invisible ally who can help us defeat all of our enemies, just like He has done in the past. Yes, Gd Almighty is our secret weapon.

Here we are a half a century after the totally miraculous Six Days War. No country supported us. Everyone stood on the sidelines to watch, expecting a certain defeat and destruction of the State of Israel. All over the world, the Jewish People and those who cared about us prayed to Gd for our victory. And Gd facilitated that miraculous victory!

It doesn't matter what goes on in the White House. Thank Gd Trump's main focus isn't on Israel and its enemies. I just hope that Prime Minister Netanyahu will stop looking for a human savior. Only Gd can save us, and He's right here with us waiting for the call. We must pray to Gd and thank Him for the miracles he has already done for us. 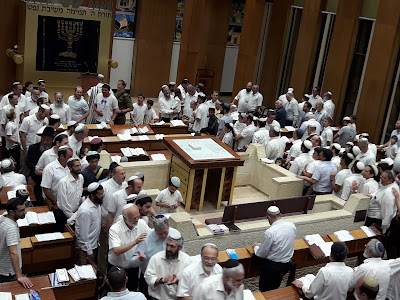 I agree with everything you wrote: anarchy in the US administration but I'm certain for us Hillary would have been disastrous. Likewise I agree that our gov't (Bibi) must cease looking for redemption from abroad instead of above to Him. Once again you've expressed my feelings exactly. Bravo!

Evil Logic Explained
(why many people like the "Two State Solution"):
http://shilohmusings.blogspot.com/2016/03/guest-post-evil-logic-explained.html

How intermarriage harms Jewish
sovereignty over the Land of Israel:
http://shilohmusings.blogspot.com/2016/11/guest-post-joshua-chapter-23-verse-12.html