Six Days War, Lots of Memories But No Pictures 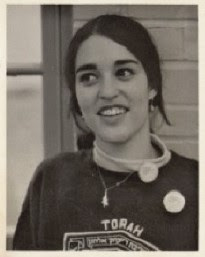 This is how I looked when in high school. I'd wear sweatshirts from NCSY or Seminars decorated with SSSJ buttons. I was the true non-conformist. No green bookbags for me!

In my last couple of years there, in Great Neck North, I became a big Jewish activist. It began when I got involved in the synagogue's NCSY chapter, which led me to SSSJ-Student Struggle for Soviet Jewry, TLS-Yeshiva University Seminars and then to the Betar Zionist Youth Movement. To put it very mildly, if I didn't fit into Great Neck society before, (we only moved there in 1962 when I was thirteen 13,) the the new Zionist and Orthodox Jew was definitely an oddball and hadn't a chance in hell to ever fit in.

If someone was writing a screenplay or coming of age novel, they'd love the timing of it all, since I graduated in 1967, which for a very involved Jew and Zionist as I had become, was the perfect time to have a major crisis or change.

As high school was finishing, most of my classmates were busy with prom plans, graduation parties etc. I was just counting the days to be out of that place.

When the threats against Israel began in May, we began fundraising. One Sunday, the kids in my NCSY chapter made a "workday," and people paid us to do all sorts of chores. The payment went to NCSY's Torah Fund to be transferred to some project in Israel.

I have memories of standing outside of some Jewish event in Manhattan, holding two corners of an Israeli Flag, while someone else had the other two, and passersby put money on the flag. I think I did that with my Betar friends. I ended up joining Betar at the beginning of my senior year in high school, when Israeli Folk Dancing just wasn't enough for my budding Jewish activist and Zionist identity.

There was also a giant meeting in Great Neck for the Jewish Community, which had the participation of all four rabbis, Rabbi Wolf from the Orthodox Great Neck Synagogue, the Conservative rabbi from Temple Israel, and the two Reform from Temples Beth El and Emanuel. I was an usher.

During the war, our class had its Senior Class Beach Day at Jones Beach, which I was required to attend. Attendance was very strict in those days. I walked around collecting money for Israel from my classmates, the Jewish ones. One, who was dating a non-Jew at the time, got into a big fight with his girlfriend when he donated. Some told me that their parents had "donated tanks" etc. Great Neck had some very wealthy people. The nickels and dimes I managed to  collect were nothing compared to the real fundraisers.

And finally, where was I when I saw the broadcast of the IDF paratroopers crying at the Kotel, Western Wall at that first moving prayer? I was across the street from my house babysitting. I'm glad the kids were all asleep, because as I heard the soldiers crying, I cried, too.

Just over three years later, I was married and we made aliyah. I just can't imagine living anyplace else but in Israel!

Terrorism Persists Because It Has Been Rewarded:

Oh my, Batya, you reminded me of a beautiful Indian actress. ..