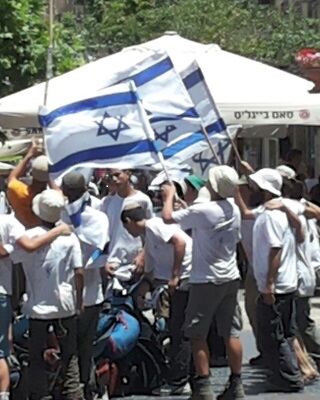 Just because Gd Almighty loves the Jewish People and has rescued us many, many times, recently and thousands of years ago, doesn't mean that we are free to disobey and expect to thrive and survive. This week's Torah Portion, B'har- B'chukotai, a very long double makes it clear. That's especially in the fifth out of seven sections:


Fifth Aliyah: And more blessings: An overabundance of crops and G‑d's presence will be revealed in our midst. This section then describes the severe, terrifying punishments which will be the Jews' lot if they reject G‑d's mitzvot. The punishments include disease, famine, enemy occupation of the land, exile, and desolation of the land. The non-observance of the Sabbatical year is singled out as the reason for the desolation of the land. The aliyah concludes with G‑d's promise never to utterly forsake us even when we are exiled in the lands of our enemies. (Chabad)

This Aliya begins with the last four p'sukim of the "good" part - the promises for our proper Torah behavior. G-d will be with us; He is the One Who took us out of Egypt, broke the yoke of our oppression, and led us out with heads held high.
[P> 26:14 (13)] But then we get to the "Tochacha" containing G-d's detailed admonition to the People, warning of the dire consequences that will result from disregard of Torah and mitzvot. Because it is so painful to hear these terrible words - especially realizing how often they have come true - the custom developed to read this portion in a low voice. We are ashamed that G-d needs to threaten us in so graphic a way. The minhag is to call the Rabbi, Gabbai, or the Baal Korei himself for this portion, so that no one else will feel slighted by receiving this harsh Aliya. The Tochacha is always contained within one Aliya which begins and ends on "cheerier" notes.
A significant theme of the Tochacha is the connection between the keeping of the laws of Sh'mita and our hold on the Land. We must always realize that we do not keep Eretz Yisrael without any strings attached. We have a clear commitment and responsibility to keep the Torah and fulfill the mitzvot as individuals AND as a community. Sh'mita was commanded in B'har. In B'chukotai, we are presented with the dire consequences of the disregard of this important mitzva. [S> 26:27 (20)] Continual reference is made of both physical and spiritual benefits from observance of mitzvot,
and the opposite, for disregard of the mitzvot. This combination of promise of good and threat of bad, together with the body of mitzvot of the Torah, constitutes the covenant between G-d and the People of Israel at Sinai via Moshe. (Torah Tidbits)

Yes, that means that as we celebrate fifty 50 years, half a century since the super miraculous of Biblical proportions victory over our enemies, we have not been given a "free pass" to do whatever we want with those gifts.

Unfortunately, even after half a century and a new generation in the driver's seat, our politicians still haven't grasped that Gd may let the Arabs exile us once again if we don't fully embrace the Land and act as a proper sovereign nations.

I pray that our Israeli politicians will lead us to the Redemption and blessings that await, instead of trying to please our enemies and compromise on our security.