Honestly, Beware There are Different Cultures and Values

No doubt that many people didn't like my Sunday's blog post, Jews Who Fled Nazi Germany/Europe weren't The Same as Today's Fleeing Arabs. There are too many good people all over the world who go for the simplistic stereotyping that all refugees as somehow "innocent." They insist that helping the Arabs is a great tikkun, correction to make up for all the terrible things done to Jews over the millennia.

I hate to burst your balloon, but life's not so black and white. Before I say more, please watch this and read it carefully.

If you're having trouble believing it, then just watch it again. 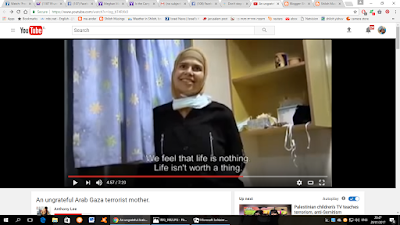 And how about remembering that during World War Two, predating remote-controlled pilotless planes, the Japanese solved the problem with pilots trained to crash their planes into American ships and die. It was a "great honor," just like the muslim shahid. And I bet you thought that "suicide bombers" were Arab inventions...

Another thing, what do most of the "shooters" in America have in common?

Just hope that there is some way of effectively vetting those who want to enter your country.
Posted by Batya at February 01, 2017

It's heartbreaking that so many of my fellow US citizens are getting sucked into this Esau mindset...The blind leading the blind. Truly the line in the sand has been drawn. The realm of death versus the realm of life. I choose life.

Unfortunately there is considerable ignorance regarding these matters. I read where the Yeshiva University has come out to consider themselves a sanctuary place. There are already "Laws" on the books regarding harboring illegals. Does a frum Jewish organization sanction breaking the law now. There are criminal penalties for such actions.

In any event there are a good many of these refugees who are committing the most heinous acts with young girls. It is Unbelievable that cities and the media are actually keeping this out of the public eye. Parents of these victims simply cannot get justice. These cases are spread throughout the country and Should be a national story. But where is the coverage.

Unfortunately this problem exists because of Federal money involved. There are literally billions given to religious organizations to accommodate the refugees. These organizations are reaping huge profits in this endeavor.

I am unable to comprehend why Anyone would give aid and comfort to those who would commit murder, rape and other crimes, even for monetary gain. Yet this seems to be where we are. Anyone who attempts to compare many modern refugees to those Jewish refugees during and after the Shoah are wholly misguided. There is NO comparison. Jews did Not migrate to countries and begin to commit heinous acts. We have literally thousands of examples whereby Muslim refugees are animalistic. It is not unique to any one nation. It is a global scourge. Why should any nation import a scourge on their nation. The one alternative to the source of this mess is 'may both sides prevail'.

Couldn't believe the Yeshiva Univ. has declined to such a degree; it seems almost daily where we learn they are losing their Torah values for 'world' values. Between the so-called rabbis who are alumni from there and have set up their own form of modern 'orthodoxy' (open orthodoxy) to this insanity - it just gets weirder and weirder.

I'm not at all surprised at YU. About ten years ago they had a reunion Shabbaton and had the total chutzpah to invite a yored from NY to speak. And he shocked the attendees by saying how much better/easier it is to raise frum kids in NJ... That's YU!