For the longest time, Ofra was the elite of the yishuvim, Jewish communities in YESHA, Judea/Samaria/Northern Sinai/Jordan Valley. Even though, location-wise it isn't great, it attracted the best of the families.

Ofra had a rule early on that it would only accept families in which at least one of the couple worked there. The principle was to prevent the formation of a "bedroom community," a suburb that didn't produce and was dependent on nearby* cities. It was a brilliant idea, since unlike many communities, there were adults home during the workday making it much safer. Also, there were job opportunities, because it attracted a type of person willing to take the risk to start a business. And many of the early members were and still are dedicated to public service.

For us in Shiloh, Ofra was the mentor community. Our founders lived there for quite a few months to learn from them and become a cohesive group. At that time, the aim in Ofra was to stay "small, " more like a kibbutz or moshav and not reach a size that needed more than one central synagogue. It wasn't until they realized that their preschools were shrinking, and the percentage of local kids in the school was getting dangerously low that they changed tactics and began expanding in earnest. That was easier said than done, since state land around Ofra was limited. It's not that Arabs were wandering around on a regular basis caring for vineyards and olive trees, but the maps showed possible problems. So, they planned the neighborhoods as carefully as possible and did receive approval. Without approval, residents wouldn't have gotten bank mortgages.

But suddenly, the Leftist, anti-Jewish settlement groups managed to make cases that have destroyed the Ofra and nearby Amona, which is basically an "independent" neighborhood. Eleven years ago, it was thought that by knocking down a number of houses, they community could continue, but now Amona has been destroyed and nine houses in Ofra are also in the sites of the wreckers. 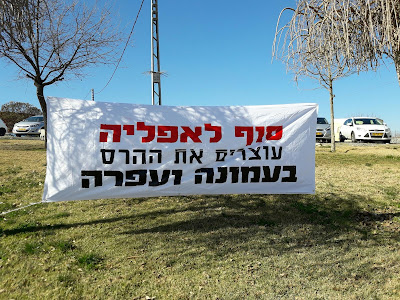 Entering Ofra today, you seen signs/banners all over protesting the fact that the government is destroying people's homes in Amona and Ofra. 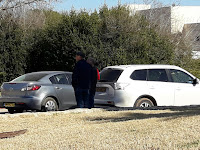 When I was there yesterday, soon before a big demonstration near the nine homes scheduled to be destroyed was scheduled to begin, I noticed men with all sorts of very impressive professional photography equipment waiting for some "action." Just as I walked by I overheard their being asked for credentials.

Later we heard that the court has agreed to postpone destruction for a month to enable the families to make plans for alternative housing. 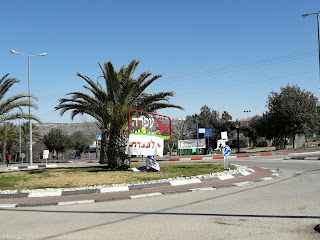 My daughter lives in Ofra with her family, and it's still a wonderful place to live, although the court rulings have strangled its chance to grow. In recent years, communities like Shiloh have benefited from this situation, since quite a few families that wanted to live in Ofra have bought homes in Shiloh where there is lots of state land to build on.

Gd willing, a solution will be found to allow Ofra to thrive again.

Full Israeli Sovereignty over all of Judea, Samaria and the Jordan Valley would be the best solution. At present we are second class citizens who must follow all the laws, armay, taxes etc but do not get full protection for our civil rights.

PS There's talk that Bibi allowed the situation to develop to reduce the support and growing popularity of the Jewish Home (NRP) and its leaders, Naftali Bennett and Ayelet Shaked, knowing that they wouldn't follow through with their threats to leave the coalition. What do you think?

Watch this film in Hebrew if you understand the language. Just click here.

Its just really a joke of a gov't. They are all to blame for our troubles. Then making a big deal about the regulation law by updating the USA. We are in no way a sovereign nation but part of the globalists answering to a higher gov't. Every thing Moshe tried to do was for nothing, absolutely nothing.

You ruin your comment by trusting Feigin who's a fake and phony.

Not Feiglin! Moshe from the Torah.