Thirty-six 36 years ago, when we began looking at Shiloh as a possible place to live in, it was considered "the end of the world," not only far from nearby Jewish/Israeli cities, but there were no nearby yishuvim, Jewish communities. The very few buses we had went by Jelazoon, an Arab refugee camp, and Ramalla. And to get to Ofra, one had to brave narrow cliff-side roads in addition to an unfriendly Arab village. 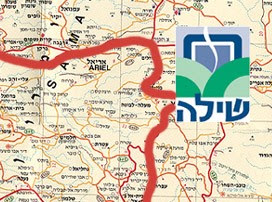 Today, Shiloh is surrounded on three sides by lots of Jewish communities of all sizes, Eli, Maale Levona, Givat Harel, Adei Ad, Eish Kodesh and more. The City of Ariel is a ten minute drive westwards followed by Petach Tikva twenty minutes further, and the Jordan Valley's Alon Road on the east is now connected to Shiloh via a road leading from Shvut Rachel and Kida, making even Beit Shean and Rimonim easy trips.

In Shiloh there are two large regional schools teaching up to the 8th grade, one for boys and the other for girls, besides a full complement of pre-schools and infant daycare. Kids are bussed in to study in the schools from Samaria, the Jordan Valley and of course from Gush Shiloh bloc of communities.

Here are some photos: 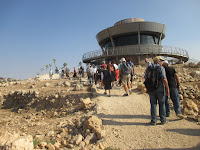 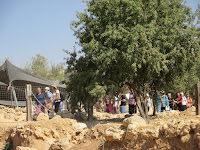 Thousands of visitors come to Shiloh Hakeduma every week, or is it everyday, to see what has been discovered in the site of Ancient-Biblical Shiloh.

Yes, we enjoy the modern and the biblical here in Shiloh!
Posted by Batya at February 10, 2017

I think bussed should be bused.
And bloq?
But yes Shiloh is a great place to live and getting greater.

Will check spelling when on computer.

you are looking younger and real pretty..