I consider Biblical Criticism, including theories published by many archaeologists, to have theological agendas. Over the years I've been puzzled by various comments to blog posts here claiming that "God promised not to destroy Israel." And over and over I've had to say that such a thing isn't true at all. It's certainly not Jewish. It is written all over the Bible that if we don't behave, follow Gd's Commandments/Mitzvot, Gd will punish us, cause our Kingdom to be invaded, exile us, cause drought etc.

This week in Matan at Dr. Yael Ziegler's class she mentioned something that helped explain why I keep hearing this totally incorrect "comfort." 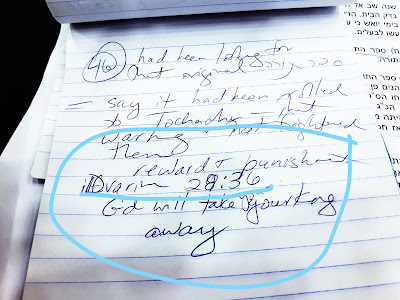 Dr. Ziegler explained that Biblical Critics do not connect the Bible's fifth book, דברים Devarim, Deuteronomy 28:36 to the previous four. It's davka in that book that we read of the Tochacha, the threat/warning, reward and punishment the Jewish People will receive from Gd.


{and if you disobey Gd}


I suggest reading the entire chapter and more. It's so obvious that Judaism, Gd's relationship with the Jewish People, is a religion that requires that we fulfill our responsibilities towards Gd or we will be seriously punished.

It's not that Gd won't forgive us or doesn't love us. He always loves us, but forgiveness depends on our doing Teshuva, repenting completely. Teshuva, Repentance isn't a simple verbal apology. It requires acting properly when confronted with the same sort of situation as the sin.

Sins can be acts against Gd and His Commandments, against other people or against the Holy Land of Israel.

Zionism and the subsequent Establishment of the State of Israel, regardless of its legal imperfections were extremely crucial Mitzvot, because it is the responsibility of the People of Israel to return to the Land. Gd would not facilitate the return if we hadn't taken the first steps, yes, very much like Nachshon's stepping into the Red Sea, which then split to allow the Jewish People to escape Egypt.

Unfortunately, and Gd willing not tragically, since the stupendously miraculous 1967 Six Days War, the reactions of the State of Israel and most of the Jewish People have been incorrect.

And this is why I greatly fear Divine Punishment and a new exile, Gd forbid.
Posted by Batya at February 17, 2017

Simple fact is the 5th book was never in the "original" one. It does not then mean there are not truths contained within as there certainly are. The verse about the unknown people is a perfect example but that does not mean there is not redactions. Leave that aside, have you studied the Dead Sea Scrolls? Specifically the War Scroll. You see, Qumran Jews, well known for their being "zealots for the Law" and purity believed that if they maintained this to the smallest detail that the "Heavenly Host" would help them defeat the Romans in the messianic war. Well, we know how that turned out. In other words, being a zealot for the law did not do anything for Divine favor. Now, that goes against what religious Jews believe in but history is quite telling. Does that mean to throw it away, certainly not. If you take an overall look at the Tanach, the underlying meaning in the stories is behavior. How we behave. I don't believe that we will be "exiled" out completely but its probable that we will lose Judea and Samaria UNLESS we get some type of help from God. So, making sure we wash our hands with a cup before eating bread will not in any way shape or form change the current bad decree against us. Being zealous and making the law an idol will not help either, but behavior. When people cannot walk down the street and have regard for another, its finished. And finished it is. So many Jews here in Jerusalem that I talk to, from the religious to secular, inside the Old City, and rest of Jerusalem sum it up the same way. Its the nasty behavior of the Jewish people. Rabbi's I have talked to say the same thing. When I am crossing a street in a crosswalk, half way through and almost get hit by a "Jew" wearing a kippa, then getting out when I say to him "lo beseder" and tries to assault me teaching this "Americai" the way it is, though he broke the law and is so damn arrogant to come after me when I say its not ok, its done. We deserve to be driven out of the land. I can tell you hundreds of stories just like this from others who are sick of it. You can mock me, dismiss it all, I don't care anymore. I am done caring about how this ends up. Why would it matter then, because, I have had witnessed (by rabbi's from all normative sects of Judaism) alterations of nature here in Jerusalem back in 2002. 3 times, 3 separate locations. Why then does it matter, because I know the Creator of All is with us, and with me. But the behavior of the Jews here has made me want to walk away and IF there was work in the galut, I would be on the first flight out of here. So say, so what, its because you fools cannot figure it out, you cannot see the forest for the trees, but love to mock, dismiss God by our inaction. As with Trump, God provided him, but the people gave him the power to succeed. It will be the same with us, but the as the Baal Shem Tov stated so well, "the rabbi's will hinder the geulah". Our lack of faith, depending upon being religious zeolots has blinded us. We could create our destiny, though don't deserve it and have driven those who can out of here. Sad, isn't it. Glad the world seems so normal! Shabbat Shalom


Has, and will the law that Gd handed down through Moses ever provided the solution to Israel's unfaithfulness to her Creator? Yes the law does promise blessings in response to obedience but when has this ever occurred? In His omniscience Gd appears to have always planned for another way that short circuits man's habitual unfaithfulness.

Before the Babylonian captivity, and well before the dispersal of Jews around the globe, the prophet Ezekiel foretells the following:

Moreover the word of the LORD came to me, saying:

“Son of man, when the house of Israel dwelt in their own land, they defiled it by their own ways and deeds; to Me their way was like the uncleanness of a woman in her customary impurity.

“Therefore I poured out My fury on them for the blood they had shed on the land, and for their idols with which they had defiled it.

“So I scattered them among the nations, and they were dispersed throughout the countries; I judged them according to their ways and their deeds.

“When they came to the nations, wherever they went, they profaned My holy name—when they said of them, ‘These are the people of the LORD, and yet they have gone out of His land.’

“And I will sanctify My great name, which has been profaned among the nations, which you have profaned in their midst; and the nations shall know that I am the LORD,” says the Lord GOD, “when I am hallowed in you before their eyes.

“For I will take you from among the nations, gather you out of all countries, and bring you into your own land.

“Then I will sprinkle clean water on you, and you shall be clean; I will cleanse you from all your filthiness and from all your idols.

“I will give you a new heart and put a new spirit within you; I will take the heart of stone out of your flesh and give you a heart of flesh.

“I will put My Spirit within you and cause you to walk in My statutes, and you will keep My judgments and do them.

“Then you shall dwell in the land that I gave to your fathers; you shall be My people, and I will be your God.

As an Australian living in "The Lucky Country" I am grateful that in 1917, horsemen of a young 16 year old nation of only about 5 million people had a key role in the battle of Beersheba that began the overrun and eventual conquest of the Ottoman Empire.

Thankfully Gd's grace has and will deliver much more than any of us can ever deserve.

Shiloh, you're not my Bible expert. Your response confirms a lot of suspicions.
John, are you referring to Australia?

Just a God used a youth in David to slay Goliath, in similar fashion He used the Australian light horse to over-run the German-Turkish trenches at Beersheba in 1917.

I believe you do well to often declare God's hand in the Six Day War of 1967 Batya. With God, when we are week it is then that we are strong.

What's the first quotation from?


Batya, my opening quotation was from !Corinthians 1:27 of the New Testament.

The apostle Paul was engaged in quashing a dispute between several parties that were claiming merit by aligning themselves with any one of a number of prominent leaders, thereby mixing an element of flesh with their spiritual faith.

"For you see your calling, brethren, that not many wise according to the flesh, not many mighty, not many noble, are called.

THAT NO FLESH SHOULD GLORY IN HIS PRESENCE."

It seems to me that Paul is basing an argument on the logic that, in giving due regard to His own holiness, God cannot receive any man/nation that may be claiming merit for himself/itself.

Under the law of Moses when the high priest entered the Holy of Holies, he came not with his own blood but with the blood of the sacrifice.

Under the hand of the Almighty, all of the above seems to ring true with Israel's past 100 year history. With God continuing to work for His own glory, I believe we can expect the future to follow a similar pattern.

That's what I thought. I really don't appreciate your quoting such things especially without attribution. I don't recognize the legitimacy of what it says. I am a Torah observant Jew and when you quote like that you're trying to sneak in your theology as if it was mine. That's not acceptable at all. Your bible is yours, and if you want to quote something I request that you start with, "according to Christian theology/bible..."
That would be intellectually honest.


I do not entertain any divisive distinctions in scripture. Moses was the first of many prophets that God sent to Israel and Judah. To follow one and to ignore the others is both illogical and very dangerous.

The disaster that befell Jerusalem in the first century AD occurred as a result of
God's people ignoring His prophets. Those same prophets speak of yet another future holocaust throughout the whole land where a surviving, chastened remnant will finally seek the Lord.

“O Jerusalem, Jerusalem, the one who kills the prophets and stones those who are sent to her! How often I wanted to gather your children together, as a hen gathers her brood under her wings, but you were not willing! See! Your house is left to you desolate;"

That's your religion. It's not intellectually honest to offer quotations without attribution.