The Bible So Timely, Parshat Shlach

For thousands of years, we have had our Tanach/Bible. As my teacher, Dr. Yael Ziegler, Matan, always reminds us:


"The Tanach is not is history book; it's a book of theology."

The Tanach aka Jewish Bible has so many stories that resonate today. Yesterday on Shabbat we read/heard Parshat Shlach שלך לך Send. Bamidbar - Numbers - Chapter 13: 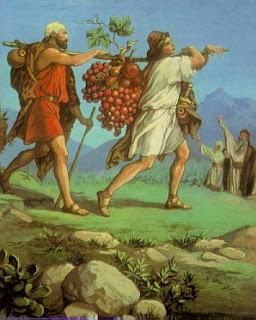 There's a keyword, one (the linguistic root)  that repeats in a variety of forms throughout the parsha, Torah portion, וְיָתֻרוּ yaturu. I do not agree with the accepted translation and meaning as "scout." And also, although this episode is known as the "sin of the spies," "חט המרגלים" I wish to remind you, thanks to Atara Snowbell, that the term does not appear at all in this parsha.

Twelve distinguished men traipsing around together gathering fruit and observing things are "tourists," not spies. Actually their assignment was more like a modern pre-aliyah "pilot trip," in which they were supposed to choose the areas in which they each wanted to live with their tribes, like the Early Americans who would "stake out" boundaries in order to claim land.

When Moses sent them out, he had expected them to each return ready to promote a specific portion, an area of the Promised Land, for his tribe. Unfortunately, only one, Caleb did that. He stated that the area of Hebron, the location of the Ma'arat Hamachpela, Cave of the Patriarchs' Burial Tombs, was what he reserved for his tribe of Yehuda/Judah.

I can just imagine Moses's shock when instead of twelve enthusiastic tribal heads promoting their new homes, ten out of twelve, the majority, insisted that although the Land was nice and the fruit delicious, there was no way that the Jewish People could actually live there. The two in the minority were Caleb and Joshua, who were rewarded for doing the job properly, as the ten naysayers all died during the four extra decades of exile in the Wilderness for the Jewish People.

My husband and I, unlike most of our Zionist friends in New York, made aliyah right after our wedding in 1970. A few followed, but the vast majority ended up staying away. All of us who did make aliyah are happy we did so. We can't imagine living any place else, and we live all over the country today. Many of the friends who stayed in America or other places still try to excuse their lack of aliyah and/or still dream of coming here.

No doubt we're all shaped by our environments. I certainly consider the thirty-five years we've been in Shiloh to be a great influence on who and what I am today. Thank Gd, we now live in an era when individuals can come, and we're not required to follow the majority of Jews.
Posted by Batya at 7:26:00 AM