Those of you who read my other blog, "A Jewish Grandmother" may have noticed a recent post about cooking with minimal water:

I wrote it, because there are major water problems in our area, from the Shomron (Samaria,)  south to Gush Shiloh, the Jewish villages around Shiloh, Eli, Ma'ale Levona and the many smaller hilltop communities. Simply put:


"The infrastructure is kaput!"

I wonder if the bureaucrats/politicians who planned and budgeted for this water piping infrastructure 35-40 years ago are/were at fault. Whether it was accidental bad planning, or did they purposely sabotage the post-1967 Zionist settle the Land undertaking, intentionally underestimating, under-planning the the future population and attractiveness to Jews from all over?

If I had a dollar for all those who had unabashedly asked me why I'm here in Shiloh during the early years we were here, I'd be very rich. Most people were under the impression that we were just playing a game, like a complicated expensive demonstration.

Contrary to all the doomsayers and doubters, the Jewish population of Judea, Samaria, Jordan Valley etc has grown and thrived. We have schools, industries, businesses, stores and even a university. And yes, we're here to stay. There's a second and even a third generation raising their children here and going to the same schools.

Too bad the Israeli Government did such a cruddy shortsighted job in setting up the water system here. Now they will just have to fix it. And this time they must plan properly for a growing vibrant population! 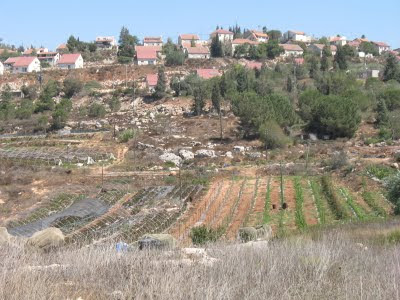 Email ThisBlogThis!Share to TwitterShare to FacebookShare to Pinterest
Labels: building in Judea and Samaria, water shortage

Those who settled these beautiful areas were serious but, maybe the gov were hoping it would all fail, because they thought of giving it away from the start. No need to build it right when you plan to get rid of it. Just saying. Luckily, H' has other plans.

I really like all the people of the Shomron and Juda area, but let bet onest: this is a big failure, despite all what have been achieved. and I'm explaining: Betar, Modiin Ilit, Imanuel, Tel Zion = 60000 people. Those one really do not care of Yehuda veShomron. Give them a home in Bnei Brak or Beit Shemesh, they would leave. Ariel, Maale Adumim: most of the population isn t religious, they are also there because of low prices. Another 50 000 people. I mean: the real population of the yshuvim that really care living davka there, is maybe around 100 000 people only. Out of 7 millions jews in Israel, how many % does that make ?

Anonymous at 6:35 obviously has no belief in H' or in His holy Torah! He thinks mortal man runs the world - excuse me, it does not work that way. The world exists because of H', Torah, Yehudim & Eretz Yisrael and the heart of EY is Yehudah/Shomron.

To the ridiculous comment at 6:35 pm, another problem with your comment are your statistics; there are many more Jews than 100,000 in Yesh and there are not 7 million Jews in Israel. There is not even 6 million, as many are not real Jews!!!

I'm sorry that you cant face the truth of facts. I DO believe in Hashem, and I DO KNOW that Yehuda veShomron are the really core hart of Eretz Yisrael, and I trust Him that He'll give it to our full control by the time Moshiach will come. What I'm saying is that, obviously, that's not it yet. Because all the governments from '67 till know did not really help building a strong achiza, hold, on those areas. I would have dream of MANY towns like Modiin (not Modiin Ilit), all through the "territories", and what do we get? Kyriat Arba, 5000, and Maale Adumim, 20 000 ? Don't make me laugh... Time is now ripe to tell yourself the truth: there is no growth and no success in all the yshuvim spread. W/o a governemnt lead decision to build highways (not like road 60...), to build towns (like Harish, Beit Shemesh, Modiin or...Rawabi, leavdil), there is no future in Yesha. Just know it. Despite, I love all of you guys.

Anon 30/6 @2:25, I wouldn't want you on my softball team, let alone anything regarding life-and-death issues like settling the Land of Israel. You give up too easily.

Israel (the Jewish People) never won anything easily. Making us depressed doesn't help. However, a little encouragement to get rid of the non-Jews (yes, both Muslims and Christians) who want to drive us out...now, that would be more like it.

By the way, Batya, have you read the Scientific American article about Israel's water SURPLUS?

I remember from at least one previous post that you'd rather have the natural rainwater than the processed desalinated water in the winter, but wouldn't you rather the desalinated stuff than nothing in the summer? And doesn't charity begin at home? Shouldn't Israel make sure that all the Jews of the country have sufficient water before offering to other countries?

CDG, it's not a matter of having enough water in the country. It's that the infrastructure was badly planned. It wasn't set up for a vibrant and growing Judea and Samaria. Everything must be upgraded.

Batya, you made my point for me. My last sentence above includes infrastructure planning and implementation. ;)

The government has a fokokt sense of priorities.