The Arabs Have Returned! 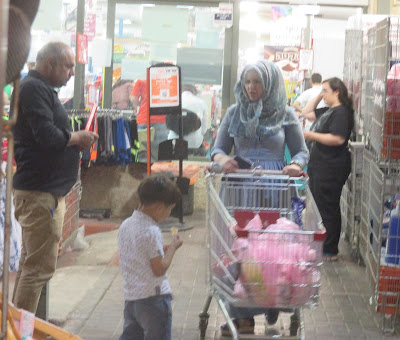 We were all wondering how long it would take, but as the local Muslim Arabs began preparing for their Ramadan Holiday, when they buy lots of nice clothes for their children and themselves and feast all night, after a long day of fasting, the prices, quality and selection in Rami Levy and Yafiz, Sha'ar Binyamin became too attractive to ignore.

The fears of revenge terror by Jews and the "confiscations" by the PA Police have kept many away for the past few years. That is except for this season, since according to reports by our loyal Arab customers, Arab women with fluent English from years living abroad, there is no comparison between what they can buy here in Jewish shops and what is sold even in Ramallah, the largest Arab city in the area.

To make things very clear, I do not work in Yafiz, Sha'ar Binyamin for any ideological, idyllic agenda. Actually, when I was offered the job in the store, all I could think of was making a salary, even a small one, since we desperately needed more monthly income. Adjusting to work with Arabs was a lot easier than I could have predicted. When they come to us to shop they respect the fact that we Jews own the stores. They are strict with their children and keep them in line when shopping, which not all Jews are willing to do. I'm a pragmatist, and have no doubt that if the ideologues would just butt out, life would be a lot more peaceful.
Posted by Batya at June 08, 2016

If you are having problems with parnassah,
then you might feel better if you listed to
Rabbi Shalom Arush and Rabbi Lazer Brody:

Politicians and ideologues ruin everything.